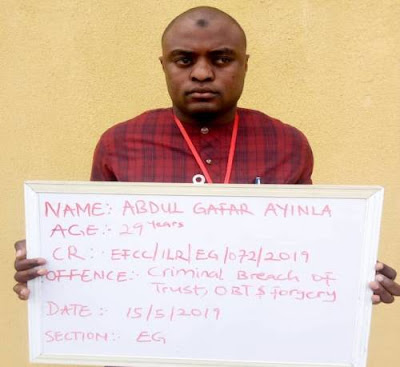 The Economic and Financial Crimes Commission (EFCC) has arrested a member-elect of the Kwara State House of Assembly Abdulgafar Ayinla for alleged involvement in N25 million property scam, forgery and obtaining money under false pretense.

It was gathered that operatives of the Ilorin zonal office of EFCC effected Ayinla’s arrest.

The petitioner, who resides in the United State of America, alleged that Ayinla, a legal practitioner, was introduced to her by her late aunt to purchase some properties for her in Ilorin, the Kwara State capital.

The petitioner, who did not want her identity, alleged that “the lawmaker-elect then sold me another two plots of land, with four bedroom bungalow at window level at Agric area in the metropolis.

“My uncle went to his office several occasions and did not meet him. During one of the visits, my uncle obtained a copy of C of O that has my property addresses, he then contacted the owner’s name on the C of O. Since this incident, Gafar has been avoiding everyone.”

The suspect, according to sources, claimed to have diverted the money for his personal use, promising to pay back the money when he receives his wardrobe allowances.