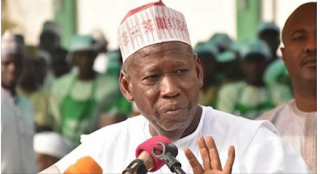 Kingmakers in the Kano emirate have filed a case against Abdullahi Ganduje, governor of Kano state, for splitting the emirate.

In the suit with number K/197/2019 filed on Tuesday at a state high court, Ganduje, the state house of assembly, attorney-general of the state and five others were listed as the defendants, while the kingmakers— Yusuf Nabahani (Madakin Kano), Abdullahi Sarki Ibrahim (Makaman Kano), Bello Abubakar (Sarkin Dawaki man Tuta) and Mukhtari Adnan (Sarikin Ban Kano)— were listed as first, second, third and fourth plaintiffs respectively.

The kingmakers said the governor’s assent to the bill breaking up the emirate was done in bad faith and the action was a desecration of centuries old tradition.

They also asked the court to stop the governor from deposing Sanusi or transferring him out of Kano emirate without consulting them.

“The defendants, in purporting to amend the Emirs (Appointment and Deposition) Law, 1984 have desecrated centuries old and highly revered traditions and heritage of the people of Kano and have uprooted the Plaintiffs various traditional titles without giving a hearing to the Plaintiffs and their clans or having regards to ancestral history by hurriedly enacting the Kano State Emirs law, 2019,” a copy of the suit seen by TheCable read.

“The defendants desecrated the ancestral history and all known laws connected with or pertaining to Kano Emirate’s customs and tradition by: (a) establishing Bichi Emirate comprising of 9 local governments including Dawakin Tofa and Dambatta, the ancestral homes of the 1st and 4th plaintiffs. The first plaintiffs have her been under any authority of Bichi district.

“(b) Establsihing Gaya Emirate comprising 8 local governments including Wudil and Gabasawa, the ancestral homes of the 2nd and 3rd plaintiffs.”

The kingmakers are seeking a declaration that the passage of the law breaking the emirate was not for peace, order and good governance of the state and therefore contrary to Section 4 (7) of the 1999 constitution.

They are also seeking a declaration that the the governor lacks the power under the existing “emirs laws of Kano state, 1991 to appoint emirs of Bichi, Rano, Gaya, Karaye or any other person and that the appointments made are unconstitutional, illegal, null and void”.

The kingmakers are asking the court to give an order restraining the newly appointed monarchs from parading themselves as emirs.

TheCable had reported how Ganduje moved to depose Muhammad Sanusi II as the emir of Kano or reduce his influence.