I’m not sure Lai, Abba Kyari are well behaved this Ramadan -Osinbajo 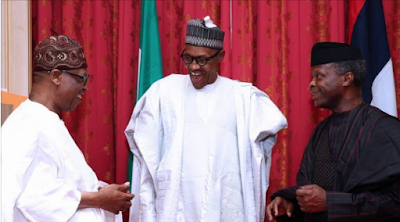 Vice-President Yemi Osinbajo says he cannot say for sure that Lai Mohammed, minister of information, Adamu Adamu, his education counterpart, and Abba Kyari, chief of staff to President Muhammadu Buhari, are in their best of behaviour this Ramadan.

Osinbajo, who spoke when Buhari hosted him and some ministers to iftar (breaking of fast) at the presidential villa on Monday, said some reasons make him look forward to Ramadan but those reasons are “are now being seriously challenged”.

According to him, one of the reasons is that his friends are “far less troublesome during the Ramadan”, but he cannot say the same for Mohammed, Adamu, and Kyari this year.

Osinbajo said another challenge is that Buhari presided over the longest federal executive council (FEC) meeting in the council’s history this Ramadan.


He said he looks forward to Ramadan because FEC meetings are shorter while the period lasts but “we shouldn’t expect anymore that meeting will necessary be short during the Ramadan.”

The number two citizen urged the attendees to use the Ramadan season to remind themselves that their mandate is to secure the welfare of Nigerians.

“Mr President, I must say that there are some reasons I had always look forward to the Ramadan session. But some of those reasons are now being seriously challenged,” Osinbajo said.

“The first of those reasons is that during the Ramadan meetings are usually very short. But, unfortunately, last Wednesday Mr President seemed to have destroyed that very good notion by taking us through the longest FEC meeting in the history of the federal executive council.

“So, we shouldn’t expect anymore that meeting will necessary be short during the Ramadan.

“So, I think that all we can truly expect now from the session is possibility of what it was meant to do which is to remind us of some of our responsibilities to ourselves as brothers and to our fellow men/women especially our roles as leaders.

“I think is auspicious that this particular Ramadan falls at the eve of the new term in office.

“So, it is an opportunity for us to remind ourselves over the core mandates which is the welfare and security of majority of our people.”