I would be stupid to stay without plan – Tottenham boss 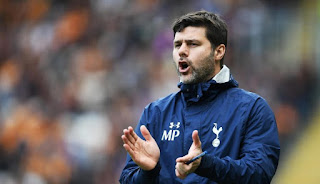 Mauricio Pochettino says he would be “stupid” to stay at Tottenham if the club aims to repeat their success without a change in business plan.

He will discuss his future with Tottenham chairman Daniel Levy following the Champions League final next month.

The Argentine led Spurs to a dramatic semi-final victory against Ajax on Wednesday, recovering from 3-0 down on aggregate with 45 minutes to play in Amsterdam to progress to the final on away goals.

“I am open to everything,” Pochettino said when asked about his future.

“What I am not open to is starting a new chapter with no plan, with no clear idea, with not being transparent and being able to tell our fans what is our objective, to stop talking about perception, talk about reality – because if not, it is going to be difficult.

“We know very well that we need to operate in a different way and that doesn’t mean to spend more or less money. It’s to be transparent and say: ‘This is what we want for the next year, or the next five or 10 years.’

“It would be very naive to think we can continue to operate as we have done and that it will get us to the Champions League final and the top four every season when we’re competing against projects like Liverpool or the Manchester clubs.

“If you want to expect the same from us as from Liverpool, the Manchester clubs and Chelsea, give me different tools to work with.

“If not and I see people working in the same way in the future, and I’m going to be this guy, I am the most stupid person to work. We need to create a realistic plan to develop in the next year, five years, and to match people’s expectations because, if not, our destiny is to crash.”