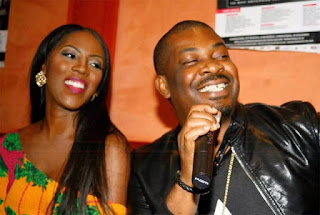 Celebrated Nigerian songstress, Tiwa Savage has been in the news following the announcement of her exclusive global recording agreement with Universal Music Group (UMG). In the same vein her exit from the Don Jazzy led Mavin Records has been greeted with diverse reactions, especially that it was devoid of rancour and drama.

“I’ve never met anyone like him who’s so selfless. A few people might think our messages to each other is just for the gram, but honestly, 1000%, it’s very very real. Contractually yes, I guess I’m not with Mavin, but I don’t think I can ever leave Mavin. It’s an emotional feeling. I’m part of the family. I’m still close to everyone,” she adds.

Tiwa who recently took a break from social media explained the rationale behind it.

“When I first took a break, I was just getting caught up in social media, checking my phone once I wake up. Then I was like, I’m just gonna take one week off and I started enjoying it. Then one week became two weeks, and two weeks became a month and that was it.”

“Within that period we finalised the deal and I was like, maybe it’s time to rebrand and start afresh. I didn’t actually start it because of this deal. I just wanted to take a break. Then I started deleting pictures because my page looks cluttered and I wanted my page to have a theme.”