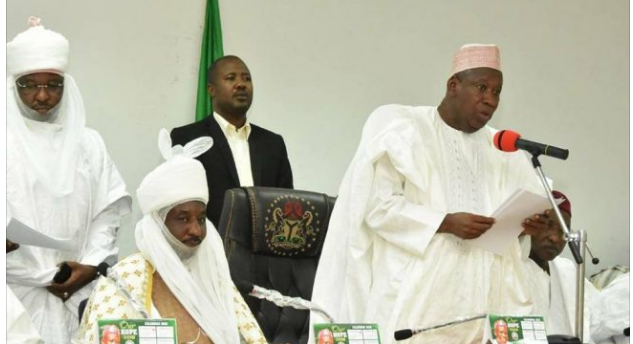 Abdullahi Ganduje, governor of Kano state, has given assent to the bill passed by the Kano house of assembly on breaking up the emirate in the state.

With the development, Kano now has five emirates: Kano, Rano, Gaya, Karaye and Bichi, but the domain of Muhammadu Sanusi, emir of Kano, has been reduced.

Ganduje had earlier vowed to give assent to the bill immediately it is transmitted to him.

Speaking while signing the bill before Kabiru Rurum, speaker of the state house of assembly, and other lawmakers, Ganduje said “traditional institution will now go closer to the people”.


“We are about to make history today, and in the Holy Month of Ramadan,” he said.

He explained that, with the expansion of the emirate council and importance attached to the institution alongside preserving the cultural heritage, there was a need to bring forth the all-important institution to serve people better.

According to him all the necessary requirements needed for the immediate take-off of the new councils were in place.

“King makers will be known very soon. So also all other process and procedures will be completed for appointing respective emirs, issuing them with appointment letters up to the Coronation stage,” Ganduje said.

He thanked the state assembly for the “historic work” done, saying Kano would now have sustained development in all aspects.

“In the areas of education, health, environment traditional institution is indeed partner in progress,” he said.

“With this development therefore, all hands will be on deck to take Kano to the next level.”

We had earlier reported how the governor plotted to either remove Sanusi or whittle down his power.

An official of the state government, who asked not to be named, had revealed that Ganduje was determined to achieve this.

“The governor is determined to remove the emir, and if this does not succeed, he will break the emirate into pieces to whittle down Sanusi’s power,” the government official had said.

Sanusi reportedly opposed the re-election of Ganduje, who needed a disputed supplementary election to be returned to office in the March 2019 governorship election.

After Ganduje lost the poll heavily in Kano municipal, there were rumours that he would hunt the emir after the election.

Ironically, the action of Ganduje is similar to what Abiola Ajimobi, the outgoing governor of Oyo state, did to the olubadan of Ibadan, Saliu Adetunji, whose authority Ajimobi sought to decimate by approving 21 beaded kings for Ibadan.

Ganduje and Ajimobi are in-laws.