Ganduje retains all commissioners, lauds them for shunning corruption 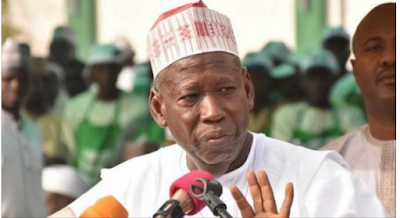 The Kano State Governor, Dr Umar Ganduje has asked all his commissioners to remain in office until the 29th May date for the swearing in of new administrations across the country.

Ganduje said during what was supposed to be the last executive council meeting of his first tenure, pointing out that all the commissioners truly deserve commendation for being dutiful, transparent, committed and prudent in the management of their respective offices in the last four years.

“I thank you for being prudent in the management of your respective ministries’ resources. You proved your mettle by exhibiting exemplary leadership,” he stated.

The governor equally commended them “for not being involved in any fraudulent activity during your time in office. None of you has ever been accused of any form of corrupt practices. This is commendable.”

Ganduje singled out his deputy, Dr Nasiru Yusuf Gawuna, who he said “came mid-way into the administration. But he contributed immensely towards the development of the state.”

He went on to commend the Secretary to the State Government, Alhaji Usman Alhaji, who he described as the general coordinator of government activities.

“I have been in government for many years of my life, but I never had it so good and smooth government-labour relation than this. Throughout the four years, they have been peaceful with labour unions and workers generally,” he noted.

On the appointment of new permanent secretaries, Ganduje reveals that, “We are putting in place procedures that will not pave way for business as usual. Business shouldn’t be as usual.”

He added that government would consider the inclusion of professional people, stressing that “…we must give technical people chance to come on board.”

Governor assured that those who applied for the position, after being shortlisted, would go through test and after being appointed, they would be placed on provisional period for six months before they would be confirmed finally.

“There is going to be performance indicators, like well management of people, zero-tolerance to corruption, good and effective file management and transparency among others,” he disclosed.

Ganduje further thanked all the council members for the role they played during the last gubernatorial election, saying, “All members of my cabinet I am proud of you. We are still members of the same family. And I hope you will accept any assignment given to you in the next level, when you are given.”

In a remark, the Secretary to the State Government commended the governor on behalf of all members of the Council, for the opportunity given to them to serve the administration.