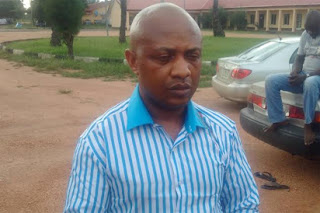 Suspected billionaire kidnap kingpin, Chukwudumeme Onwuamadike a.k.a Evans on Friday complied with the order of an Igbosere High Court, Lagos asking him to get a new counsel.

Justice Adedayo Akintoye had on April 10 ordered Evans to get a legal representative before the next court sitting because absence of his legal team had stalled proceedings for three consecutive times.

This is the third time Evans had changed his lawyers in his trial for several cases of kidnapping.

Evans was charged by the Lagos State Government on charges bordering on conspiracy to kidnap, kidnapping and attempted murder.

In the first charge, Evans is standing trial alongside Joseph Emeka, Ugochukwu Nwachukwu, and Victor Aduba.

In the second charge, he is standing trial alongside Joseph Emeka, Linus Okpara and Victor Aduba.

At the resumed hearing, Mr R. B. Eke, announced his appearance as Evans’ new counsel.

Eke informed the court that he had just taken over the case and would need time to study the case file.

He prayed the court to adjourn the case to enable him study the case file and be abreast with the court’s proceedings.

However, on the second charge, Mr J. C. Jiakponna, announced his appearance as the counsel for the third defendant, Linus Okpara, who was being represented by Evans’ former counsel.

Jiakponna, informed the court that he had a bail application.

The Lagos State Prosecuting Counsel, Mr Y. G. Oshoala, however, told the court that he had not been served with the bail application of the third defendant.

Consequently, Justice Akintoye adjourned the case until June 27 for the continuation of trial within trial of Evans and May 23, for the hearing of the third defendant’s (Okpara) bail application.

On Jan. 16, during a trial within trial, Evans denied the confessional statement he made to the police after his arrest in 2017, saying it was made under duress.

Evans told the court that he signed the statement under duress to save him from being tortured to death.

Evans gave details of how members of Inspector General of Police (IGP) Intelligence Response Team allegedly tortured and killed several others, who were paraded alongside him in his presence.

However, Evans was cross-examined by the Lagos State counsel to prove that his statement was not taken under duress.