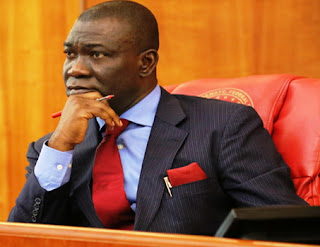 At least 42 witnesses will testify against the victory of Deputy Senate President, Ike Ekweremadu, in the last National Assembly election, in a petition before the National/State Assembly Elections Petition Tribunal in Enugu.

Mr Z. Akubo, counsel to the petitioner, Mrs Juliet Ibekaku-Nwagwu of the All Progressives Congress (APC), disclosed this during the pre-hearing session of the tribunal on Wednesday in Enugu.

Ibekaku-Nwagwu is challenging the declaration by INEC, of Ekweremadu of the Peoples Democratic Party (PDP), winner of the Feb. 9 Enugu West Senatorial election.

Akubo said that the petitioners may still be compelled to subpoena more witnesses depending on the circumstances of the hearing.

He requested that five minutes be allotted to each of the general witnesses and 15 minutes to the star and expert witnesses for the adoption of their testimonies.

The counsel said that the petitioners had not filed issues for determination in the petition, adding that they would do so in due course.

In her submission, Mrs Justina Offiah (SAN), counsel to Ekweremadu, said that the respondent would be presenting 36 witnesses to prove his case.

Offiah said that the respondent might or might not call all his witnesses depending on the witnesses presented by the petitioners.

“Our aim is to match the petitioners witness by witness,” she said.

The senior advocate said that the first respondent would reject any document that did not pass the admissibility test.

Counsels to the PDP and the Independent National Electoral Commission (INEC), Messrs A. I. Ani (SAN) and Emeka Udeogba respectively, said they would present six witnesses each.

However, Udeogba said that INEC might be compelled to subpoena more witnesses depending on the circumstances.

The Chairman of the tribunal, Justice Haruna Kereng, announced adjournment its sitting until May 23 for commencement of hearing.

The tribunal had prior to the pre-hearing session heard an application by the first respondent for the striking out of certain paragraphs in the petition.

Offiah then told the tribunal that such paragraphs raised serious criminal allegations of falsification of figures, ballot box snatching and stuffing, but did not name the alleged perpetrators.

The counsel said that having only INEC as a respondent was not sufficient enough to defend the alleged crimes.

“If the alleged perpetrators are not mentioned in the petition, then the allegations need not go on trial. We urge the tribunal to strike out those offensive paragraphs,” Offiah said.

However, counsel to the petitioners/respondents told the tribunal that they had filed a counter-affidavit based on Section 285 (8) of the Nigerian Constitution and urged the tribunal to strike out the application.

The tribunal had however reserved ruling on the application.