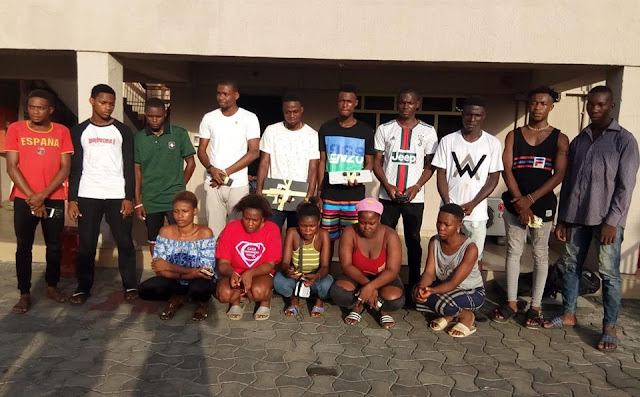 The suspects, who are between the ages of 18 and 30, were nabbed while relaxing in their hotel hide – out. Their arrest followed surveillance and intelligence reports on their activities and a response to the resolve of the Acting Executive Chairman of the EFCC, Mr. Ibrahim Magu to rid the nation of internet fraudsters.


Items recovered from them are laptops and phones. The suspects have made useful statements to the Commission and would soon be charged to court.

This is coming days after the Ibadan zonal office of the EFCC on Friday arraigned one Akeredolu Oluwafemi Temidayo (a.k.a. Susan Henderson) before Justice Joyce Abdulmalik of the Federal High Court 2, sitting in Ibadan, Oyo State.

Akeredolu, who claimed to be a graduate of Insurance from The Polytechnic, Ibadan, was arraigned on a three-count charge of obtaining money under false pretence, possession of fraudulent documents and forgery.

The accused was alleged to have contravened Sections 1, 2 and 6 of the Advance Fee Fraud and other Fraud Related Offences Act, 2006, as well as Section 1 (2) (c) of the Miscellaneous Offences Act, Cap. M17. Laws of the Federation, 2004.