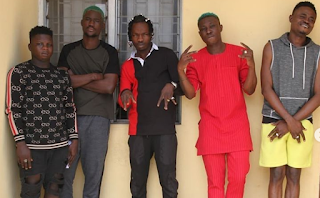 Following the arrest and parade of singers, Naira Marley and Zlatan Ibile, among others yesterday by the Economic and Financial Crimes Commission (EFCC), a number of Nigerian musicians have come out in support of the two artistes Naira Marley, whose real name is Afeez Fashola, and Omoniyi Temidayo, better known as Zlatan Ibile, were arrested by the anti-graft agency over two weeks after Naira Marley seemingly endorsed internet fraud widely known as Yahoo Yahoo.

The artiste had said internet fraudsters (Yahoo boys) boost Nigeria’s economy through their activities, describing internet fraud as a form of avenging the transatlantic slave trade visited on Africa and some parts of the world in the past. In the Instagram live video, Naira Marley added that the political class had looted the country, stressing that but for “Yahoo Boys” whose money stay in circulation in Nigeria that the nation’s economy would have long collapsed.

“All you guys, all the money in your pockets, all the money you spend, you think it’s the government that is making the money go round?” he asked, adding: “You better sit down and pray for yahoo boys. If them stop yahoo, the money would not pass you guys.” So daring was the artiste that he even mentioned the names of some Nigerian political leaders, saying: “The money will go like this, from Obasanjo to Tinubu, from Tinubu to Mr. Japa, you think me I need Yahoo?

I make money from my music,” he said.

However, he didn’t create the live video in a vacuum; it all began when Nigerian female singer, Simi, publicly slammed Yahoo boys and urged them not to patronise her music, causing a frenzy on Twitter as many voted for or against internet fraudsters. Another controversial singer, Dammy Krane, who was acquitted of charges relating to credit card fraud in the United States in 2017, also described Yahoo boys as “promoters and influencers of Nigerian music” in a now deleted Instagram post.

And just days after the raging controversy, Naira Marley teamed up with Zlatan Ibile to release a single titled: “Am I a yahoo boy?” Responding to the arrest in a statement yesterday, EFCC said Naira Marley, Zlatan Ibile, along with Tiamiu Abdulrahman Kayode, Adewunmi Adeyanju Moses and Abubakar Musa, were picked up due to intelligence reports linking them to cybercrime offences.

“Their arrest followed an early morning raid on Friday, May 10, 2019 at 9, Gbangbola Street, Ikate, Lekki, Lagos. “At the point of arrest, the Commission found and recovered a number of items, including laptops, from the suspects.

“They have so far volunteered useful information about their involvement in the alleged criminal activities, even as investigations continue,” the Commission stated. Following the arrest of Naira Marley, best known for hit songs like “Is a goal” and “Japa” among others and Zlatan Ibile, popular for “Zanku” and featuring in Chinko Ekun’s monster hit, “Able God” along with Lil Kesh, top music stars like Burna Boy, Davido, and Olamide have taken to social media to show their support for the artistes.

Davido, who also received a backlash online after supporting Naira Marley during his comment on Yahoo boys, uploaded a picture of the artiste with the caption: “MARLIAN!! Freee bro!!!! Nothing spoil!! I got u!!!”

On his own, Olamide, who also posted a picture of the singer on Instagram, showed his support by urging Naira Marley fans to stay positive.

“Stay positive, Marlians,” he wrote along with emojis of prayerful hands and love. Apparently perturbed by the news of the arrest, Burna Boy wrote: “I hear @nairamarley has been arrested by the EFCC. Really? REALLY?! This better be a RUMOR!