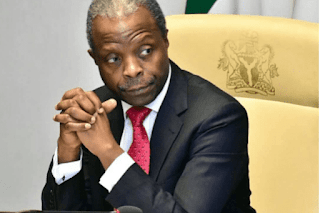 Vice President Yemi Osinbajo is unhappy that some Nigerians offer bribes to obtain drivers licences, passports or to clear goods at ports.

He said there is no reason why any Nigerian should give bribe to law enforcement agents or other officers to get things done.

Osinbajo spoke on Tuesday in Abuja while declaring open the anti-corruption conference tagged “Collaborative Approach to Eradicating the Evils of Corruption in Nigeria.’’

The conference was organised by the Office of the Vice President and the Presidential Advisory Committee Against Corruption (PACAC).

Quoting PricewaterhouseCoopers, Osinbajo said Nigeria’s 2030 Gross Domestic Product (GDP) could be up to 534 billion dollars higher if it reduced corruption.

He said it did not matter how much revenue a country made or how transformative its plans were; corruption would ensure that the majority of the people did not benefit from it or simply truncate the plan.

According to him, in spite of the high oil revenues in Nigeria’s history, debt doubled and poverty figures rose as a result of corruption.

He said that the administration was not slightly deluded into thinking that it had won the battle against corruption as it was tackling grand corruption first.

“By that we mean the stealing of huge public resources directly from the treasury; usually at the highest levels of executive authority; and the stealing of budgeted funds through various schemes.’’

He said that the enforcement of Treasury Single Account(TSA), the Presidential Initiative on Continuous Audit, and even ensuring that most civil servants were on the IPPIS electronic platform had helped greatly to control official theft of public funds.

The vice president said that the judiciary also moved the needle in recent times.

“The Supreme Court in a lead judgment of Akaahs JSC, recently held that forfeiture under Section 17 of the Advanced Fee Fraud and Other Related Offences Act is a civil process which neither requires the criminal conviction of the property owner nor his innocence.

“This opens the door for forfeiture of assets that the purported owner cannot explain, whether or not an allegation of corruption is made.

“We are now poised to deal with the wider problem of systemic corruption; especially where the average person interacts with government.

“Corruption in the issuance of contracts, licences and other government approvals; there is no reason why any Nigerian should have to give bribe to law enforcement agents for obtaining drivers licenses or passports, or to clear goods at our ports.

“All the relevant government agencies have shown a serious commitment to eradicating these forms of corruption; our next level is to create the environment for collaboration between our agencies, civil society and other stakeholders.’’

The vice president said that it was in recognition of the enormity of corruption that President Muhammadu Buhari set up PACAC in 2015.

Osinbajo said that PACAC deserved commendation not just for its sterling, innovative contributions to the fight against corruption, but for regularly setting the agenda for important conversations on the subject.

On his part, PACAC’s Chairman, Prof. Itse Sagay, said information and intelligence sharing among anti-corruption and security agencies was critical in the fight against corruption.

He said that the Sept. 11 attack in New York and the recent attack in Sri Lanka were all blamed on security agencies who failed to act on or share intelligence.

“On June 1, 2016, PACAC organised a roundtable on corruption information and intelligence sharing protocol.

He said that the justification for that roundtable was contained in the summary of the outcome of the roundtable.

Sagay said that it was observed that information at the disposal of various intelligence units in the country was not shared in a systematic and pragmatic manner to assist the fight against corruption and other related national security threats.

He said the gaps were identified as a setback in the fight against corruption.

“The recommendations of that roundtable were not only apt, but were imperative for successful collaboration and information sharing among the anti-corruption and security agencies.

“Let us use the opportunity this morning to reaffirm the determination of the anti-corruption and security agencies to work together in the interest of Nigeria in order to clear the cobweb of corruption that has almost covered the face of Nigeria,” he said.