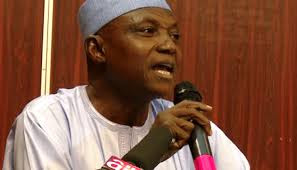 The Ohaneze Ndigbo and Yoruba Afenifere group have asked Garba Shehu, Senior Special Assistant to the President on Media and Publicity, not to liken them to Miyetti Allah.
The groups stated that Miyetti Allah is a killer group and have been engaging in kidnapping and killing people, acts they do not commit. Shehu in a television interview with Channels TV on Tuesday asked Nigerians not to see Miyetti Allah as bandits but as socio-cultural group like Afenifere and Ohaneze Ndigbo.

“It is a mistake to say the Nigerian government is talking to bandits. The Miyetti Allah group is like the Ohanaeze and Afenifere. It is a socio-cultural group. There are criminals within the Yoruba race and you cannot say because of that Afenifere is a group of criminals,” Shehu said.

See their reactions below....

In a swift reply to the comments, the Ohaneze while speaking to the to newsmen vehemently disagreed with Shehu stating that the only recognizable socio-cultural group in the North it can relate with is the Arewa Consultative Forum.

Speaking for the group, Uche Achi-Okpaga, spokesperson of Ohaneze, said there is no justification to compare the Ohaneze with a group of criminals.

He said, “There is no justification for such a comparison. It is a bad comparison.

“Ohanaeze is a regional body that is promoting the unity of the Igbo; so also is Afenifere to the Yoruba and the ACF to northerners. We also have the Middle Belt Forum in the North-Central and PANDEF for the South-South.

“You can never put Ohanaeze and Miyetti Allah on the same pedestal. These people are invading villages, killing people, and you are telling us that they are on the same page with Ohanaeze. There is no justification for that.

“This is an organisation that the Global Terrorist Index has described as the world’s fourth deadly terrorist organisation. “These people are just negotiating with criminals. We are in a state of lawlessness.”

Similarly, Yinka Odumakin, spokesperson of the Afenifere also disagreed with the Presidency while saying that the group does not abduct and kill people as the Miyetti Allah does.

He branded the comparison as “most unfair and very unfortunate.”

Odumakin said, “We are surprised that the spokesperson (Shehu) was talking like someone under the influence of drugs. In Afenifere, we don’t kill, we don’t abduct people.”

“How can you compare us to a group of people who have been killing in Enugu, Benue, Ogun and other states?” He asked.