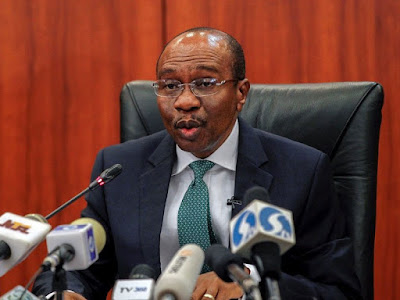 The Central Bank of Nigeria (CBN) says N150 billion which was reported as stolen from its coffers was part of a N650 billion loan to states.

The audiotape of a conversation between Godwin Emefiele, the CBN governor; Adamu Lamatek, the deputy governor of the bank, and other top officials of the bank was leaked on Sunday.

The men could be heard having a conversation about how to reconcile the apex bank’s balance sheet.

In a statement released by the bank on Sunday, the CBN said: “As publicly known the CBN was approached in 2015 by the National Economic Management Team and the National Economic Council (NEC), chaired by the Vice President, to assist State Governments with Conditional Budget Support, in the aftermath of the significant nose-dive in global oil prices and associated FAAC allocations.
“In order to ensure that ordinary Nigerians workers got their salaries, pensions and gratuities and that the economy continued to recover from the recession, the Bank provided about N650 billion in loans at 9% with a two-year grace period to 35 States of the Federation. These monies were distributed to the States monthly with documented approval of the Federal Ministry of Finance and the Presidency.

In closing the Bank’s 2018 accounts, external auditors in their Draft Account erroneously classified about N150 billion of these loans as bad, which negatively affected the Bank’s Balance Sheet and shareholders fund.”

The apex bank said it resolved the matter by approaching the ministry of finance.

“Obviously, it soon became clear that a State Government loan cannot be classified as “bad” or “irrecoverable” when the State still exists and getting FAAC allocations.

“The Bank then reached out to the Federal Ministry of Finance and they jointly gave comfort to the auditors who accepted in writing that these monies would be repaid.

“On this basis, the auditors reversed the negative entry and the certified that the CBN’s 2018 accounts were a true reflection of the State of Affairs.”

The apex bank said it would ensure that the perpetrators to justice.