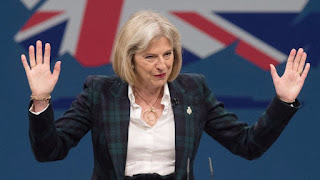 Prime Minister Theresa May on Wednesday resisted demands from within her party to give a clear timetable for stepping down, with her spokesman insisting she would stay until Britain’s exit from the EU is finalised.

“She is here to deliver Brexit in phase one and then she will leave to make way for new leadership for phase two,” the Downing Street spokesman said.

The Conservative leader is under increasing pressure from MPs and activists unhappy over her handling of Brexit, which was meant to have taken place on March 29 but has been delayed twice.

In March, May promised that after taking Britain out of the European Union, she would let another leader negotiate future bilateral ties with the bloc.

With Brexit now delayed to October 31, however, her critics the fear she might stay in office for many more months and are pressing for clarity on her departure.

She is immune from a leadership contest until December after surviving one last year.

Anger has flared up after dismal local election results last week and senior lawmaker Graham Brady met May on Tuesday to relay his colleagues’ concerns.

Brady, the chairman of the so-called 1922 committee of Tory MPs, said she agreed to address its executive members next week on the question of her future.

He also said she hoped to hold another vote on her EU divorce deal before European elections take place in Britain on May 23, by bringing forward a bill to implement the text.

The prime minister agreed on a Brexit deal with the EU last November, but MPs had rejected it three times.

Earlier, Brexit-backing Conservative Andrea Jenkyns confronted May in the House of Commons, saying “the public no longer trust her to run Brexit negotiations.”

The government has for several weeks been in talks with the main opposition Labour party to find a compromise deal, but there is no sign of progress yet.

A Labour spokesman said the party hoped to establish “in the next few days” whether a deal was possible.

If their talks fail, May has pledged to allow the parliament to decide on a new strategy in a series of votes.

The EU agreed to delay Brexit to allow British politicians to try to agree on a way to leave that minimises the impact of the split.

May on Tuesday reluctantly accepted that Britain will take part in European elections, almost three years after voting to leave the EU.

But she still hopes a divorce deal can be agreed to allow Brexit by June 30, which would mean British MEPs would never have to take their seats.