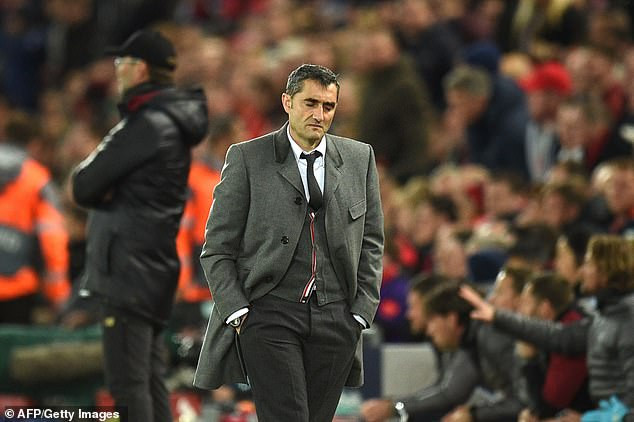 Spanish giants, Barcelona are reportedly on the verge of sacking manager, Ernesto Valverde following their Champions League humiliation at Liverpool.

The Catalans threw away a three-goal first leg lead to lose 4-0 at Anfield in Tuesday night's semi-final, second leg. Liverpool made it through to the finals on 4 -3 aggregate.

Although, Barcelona have won both La Liga and the Copa del Rey, losing out on the Champions League be won't be enough to save Valverde.
According to Spanish newspaper Marca, Valverde is 'on the edge of the abyss' and his future is in doubt despite only renewing his Nou Camp contract a few months ago.

Marca say his new deal is 'not unbreakable' and his future at the club is extremely precarious.

'I do not know how it's going to affect me. Here we are, the coach has to take responsibility,' Valverde said in the aftermath of the defeat.

'It's very painful for us, especially for our people, it's the second year they've come back like that.

'Things got on top of us after those two quick goals [from Wijnaldum]. We didn't manage to get on the scoresheet and they rolled us over really.

'They surprised us with the fourth goal - presumably my players weren't looking. Liverpool were street smart and they scored.'

He added: 'It's happened again, it happened last year.

'It's true that it has been different games, the first leg, and second leg.

'They started really well, and they pinned us back. Early goal, we reacted well after that.

'We managed to control things a little bit in the second half of the first half. We had half chances to score.

'I think that we conceded two goals and then they really kind of got on top of us after those two quick concessions.

'We haven't managed to get on the scoresheet tonight. They scored two in two and they kind of us rolled us over, really.

'They have been really strong, they played really well. We've got to congratulate them on the performance they put up in the tie as a whole.

'It is a terrible result for our fans and for ourselves. We didn't expect a situation like this. This is what has happened to us.

'It is really, really unfortunate but credit is due to Liverpool.'