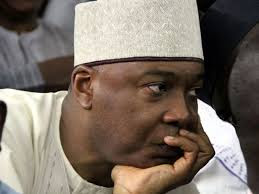 The Nigeria Anti-Corruption Vanguard has called ‎on the Economic and Financial Crimes Commission, EFCC, to probe activities of Orion Agro Industries‎ Nigeria Limited, manufacturing cigarettes in Ilorin Kwara State, considering the alleged interest of the Senate President, Bukola Saraki in the affairs of the company.

It alleged that the firm was being allegedly used by the Senate President for illicit financial transactions since 2003.

The group also called on the Board of Customs and Legal Department to halt process of renewing import license for the firm.

The group stated this in a statement on Thursday, adding that the firm was only looking for tax waiver.‎


The statement was signed by the National Coordinator of the group, Oloye Akin Ayokunle.

It also called on the Comptroller General of the Nigeria Customs Service, Col. Hammed Ali to do its due diligence before processing the Orion Agro Industries application for renewal of importation license.

The statement added, “One of our concerns again is the speed at which the process of renewing this firm license is taking at Customs, there is a government policy that additional investments should not be entertained in the Tobacco sector, Orion Agro Industries has not been in business for almost 20 years.

“According to our investigation Bukola Saraki bought into the company when he was elected the Governor of Kwara state in 2003. Since then the firm has been a signpost for illicit money laundering activities for Saraki and his cronies in the PDP.

“After closing shops for many years, the firm suddenly using Saraki last minute influence has applied to the Nigeria Custom for renewal of its license and tax waivers on pretense of building it’s factory in Nigeria.

“The company imports from it’s main manufacturer in Poland, not a single stick of cigarette was produced in Ilorin Nigeria since 2004 when it was importing tax free.

“The company should be made to give account for its local investment in Nigeria and engagement with its host communities during its years of waivers before it’s license is renewed.

“Also this company has not paid a dime as tax into the federation account and the Kwara state government. It’s in public domain that Kwara state Governor AbdulFatai has given the company 20 years tax holiday, meaning the government at all level will not get anything in return from Orion Agro Industries.”

“Everything about Orion Agro Industries‎ is shrouded in secrecy, details of the company has been pulled out on the Corporate Affairs Commission,CAC registered companies portal neither does it have Standard Organization of Nigeria SON approvals on production or importation of tobacco products in the country.

“Also the company does not have any records in SON since 2003 it has been in operation but has been moving money out of the country in guise of importation,” Ayokunle said.

‎”We are also calling on the EFCC to probe in to the financial transactions of Orion Agro Industries‎ and its link with Senate President Bukola Saraki.”‎

The group recalls that under the PDP government in Nigeria, license were issued, “to anybody for anything, once you get access to Aso Rock.

“This Orion is just one of the many companies in Nigeria that have illegally benefited from waivers and tax holidays from government. But failed to deliver on regulation guiding the sector.”