Adeleke vs Oyetola: PDP states next line of action 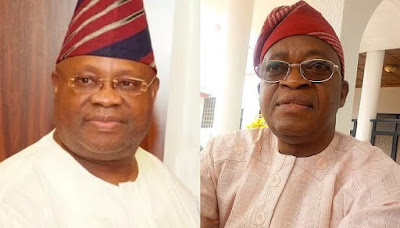 The People’s Democratic Party, PDP, has disclosed that it will proceed to the Supreme Court to challenge the verdict of the Appeal Court given in favour of Gboyega Oyetola of the All Progressives Congress, APC, as winner of the Osun 2018 governorship election.

This was contained in a statement signed by the PDP’s Vice Chairman, Eddy Olafeso, where he said that the party expressed shock over the outcome of the appeal.

Recall that INEC had declared Oyetola as the winner of the Osun State governorship election which prompted his main opponent, Ademola Adeleke of the PDP to filed petition before the three-man Osun State Governorship Election Petition Tribunal, with the prayer that he should be declared winner.

Adeleke posited that he already won the September 22, 2018 poll, stressing that there was no need for the supplementary election held on September 27, 2018.

The tribunal, in its March 22, 2019 judgment, nullified Oyetola’s victory and declared Adeleke and the PDP the winner of the election. The judgment was termed as minority judgement in some quarters based on the split judgement of two to one.

But Olafeso, in the statement issued on Thursday after the Appeal Court judgement, stated that, “Today the Federal Court of Appeal Panel delivered its judgment on the matter of Osun Governorship election in favor of the APC and its candidate in the election.

“We must say as a party in the matter, we are shocked at the premise upon which the said verdict is anchored, therefore we are certainly thinking, and importantly, in conjunction with our candidate, Senator Ademola Adeleke to exploit the only available option to us, by appealing against this decision to the Supreme Court.”

The PDP Vice Chairman further stated that, “It is crucial for us to underscore our fervent believe that justice is the bedrock upon which our democracy rest squarely and without it, despotism shall reign unhindered.

“That will not be the portion of our dear nation, thus we are determined to ensure that we pursue all actions that will give muscle to the electoral desires of the people of Osun State as validly expressed in that election.

“We restate that the APC did not fairly win that election and President Buhari gave this view credence when he publicly described the victory of his Party as “remote controlled”, thereby confirming that power privileges were criminally abused by his government and Party.

“Most certainly, we shall approach the Supreme Court for final adjudication on this matter.

“We appeal to PDP members and supporters in Osun State to be law abiding and shun all provocations. There is certainly another judicial dawn that beckons,” Olafeso stated.