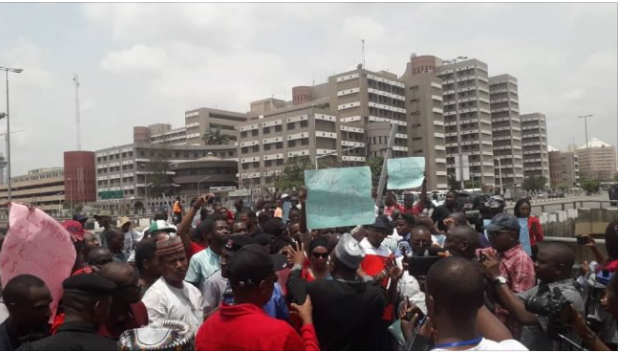 Some protesters marched to the presidential villa in Abuja on Saturday over the persistent killings in Zamfara state.

Suspected armed bandits have killed many people in the state.

On Friday, Sanusi Rikiji, speaker of the state house assembly, went on a condolence visit to Kaura Namoda emirate where at least 50 members of the civilian joint task force (CJTF) were killed in a single day.

Despite the deployment of a thousand security personnel on the orders of President Muhammadu Buhari in July 2018, the security situation has not improved.

Abdulaziz Yari, governor of Zamfara, has been criticised for not doing enough to curb the activities of these bandits.

On one occasion, Yari said he had resigned as the chief security officer of the state.


During the march, the protesters held placards which read “Shame on Yari”, “Silence is not an option”, ‘Nigeria is a failed state’, among others.

Speaking with journalists, Kadaria Ahmed, media personality and one of the conveners of the protest, blamed the governor for not showing “enough concern about killings” in the state.

Ahmed said Yari only cared “about the people of Zamfara when it comes to politics.”

“How can a govern a state for eight years from Abuja? What sort of leadership is that? We thank God he is on his way out. Under him, Zamfara has detorariated. I grew up in Zamfara, the Zamfara I grew up was peaceful, we had textile, we had sweet factories.”

Ahmed asked the president to show the people of Zamfara that he cares about them.

“We are asking for Muhammadu Buhari, the president of Nigeria, to show the people of Zamfara the same regard they have shown for him,” she said.

“For two elections, they have come out now in large numbers to vote for him, can he for goodness sake show that he cares about them. Can he provide security so that we can sleep in our homes.”

Amir Salisu, one of the protesters, said it is sad that the government had not been able to do anything to address the security situation in the state.

“It is sad that that governor has not been able to do anything about the security crisis in Zamfara,” he said.

“For eight years we have seen the security situation of the state get worse under him. It is not late for a state of emergency to be declared in the state. Yari has failed woefully. Buhari should act now.”

No official from the villa spoke to the protesters at the time of filing this report.