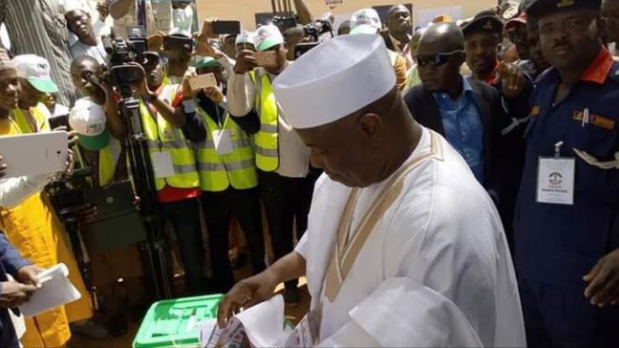 The Sokoto state chapter of the All Progressives Congress (APC) says it did not lose the gubernatorial election.

Speaking in an interview with NAN, Yusuf Suleiman, director general of the party’s gubernatorial campaign organisation, accused the Independent National Electoral Commission (INEC) of rigging the poll in favour of the Peoples Democratic Party (PDP).

Aminu Tambuwal, incumbent governor and candidate of the PDP, won his re-election bid after polling 512,002 votes to beat Aliyu Ahmed of the APC who garnered 511,660 votes.

Tambuwal won with a margin of 342 votes.

However, Suleiman said the number of canceled votes in the election was greater than the margin, arguing that Tambuwal should not have been declared winner.

He added that the election should have been declared inconclusive.

“The declaration was totally against the spirit of the law. Once the difference between the two leading parties is less than the total number of votes cancelled, you cannot declare a winner and that was what happened. Gov Tambuwal knows it. Everyone in Sokoto knows it,” Suleiman said.

“We had 1500 plus people that were not able to cast their vote during the supplementary election. The difference is just about 342 votes.

“I don’t know what law the returning officer used to return Governor Tambuwal as Governor-elect.

“The law says once you cannot determine a winner. You have to declare the election inconclusive. It doesn’t matter how many times you have to do that, a winner has to emerge.

“The reason for this is that, if the number of voters who have not cast their vote is more than the difference between the two leading parties, it suggests that if all the voters decide to vote the other way, the leading person will lose.

“That is why when you have the total number of votes not cast less than the margin, you declare a winner because if all of them decide to vote for the second person, the other person will still win.

“In this case, we have 342 vote lead, so-called lead, because it contains results of the election that was conducted twice in many places, both on March 9 and March 23. Both were recorded.

“I can’t understand what happened to INEC other than, for many of us, we believed they were compromised.”

Asked if he has confidence in INEC, Suleiman said the electoral body had been compromised.

He said the party would appeal the outcome of the polls in court, and that it would seek to inspect the ballots cast during the election.

“The leaders of INEC in Sokoto have been compromised. They are totally 100% PDP. I said it many times and this has been proven. I think the chairman of INEC should ask Sokoto INEC to account for that difference,” he said.

“We shall demand for a forensic examination of the ballots that were cast during the governorship election and you will see that many of those ballot papers will appear to be fake or they have to account where they got them from.

“We will follow this to a logical conclusion We believe in justice system in Nigeria. We believe in the judiciary and we believe we are going to get Justice in this regard and we will do whatever it takes to retrieve the mandate openly stolen by Sokoto INEC and PDP.”