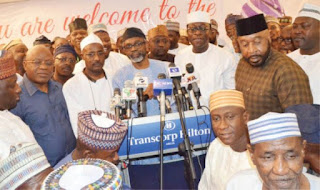 House Leader Femi Gbajabiamila (APC, Lagos) formally joined the race for the Speaker in the 9th Assembly yesterday even as indications emerged that the All Progressives Congress (APC) might have zoned the position to the South West.

However, a lawmaker told newsmen that APC national leadership has already settled for Gbajabiamila as speaker, hence the presence of three contenders namely Chief Whip Alhassan Ado Doguwa, Rep Mohammed Tahir Monguno and rep-elect Khadija Bukar Abba Ibrahim at the declaration venue, where all of them spoke.

The source added that President Muhammadu Buhari “is directly involved in the National Assembly leadership this time around, and he has personally spoken to some governors to talk to their members to support Femi. The president is highly interested this time.

“Some of our governors have since communicated this to us. So, it’s like a done deal to us. We can’t go against the party this time around. All we need is a united House, where we’ll make good laws for the country,” the lawmaker said.

It was gathered that Monguno (APC, Borno) has turned out to be the main canvasser for Gbajabiamila.

The development further lends credence to the position of the ruling party even though the party’s leadership is yet to formally unveil its zonal arrangements.

Other lawmakers working for Gbajabiamila are Peter Akpatason (APC, Edo) and Abdulmumin Jibrin (APC, Kano), who doubles as the Director-General of Femi Gbajabiamila Speakership Campaign Organization.

Citing Gbaja’s profile and qualifications for the office, Monguno had described the fourth term Lagos lawmaker as not only eminently qualified but also well versed in the knowledge of the Constitution and the norms of democracy.

“I want to say that Gbajabiamila is the man for this job. He has the legislative experience and reach, as well as an uncommon knowledge of the Constitution, which will further consolidate our democracy,” he said.

A source said Monguno had already been lined up for Deputy Speaker, in the event that Gbajabiamila emerges as Speaker of the House next June.