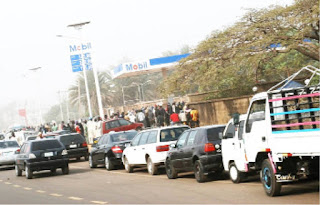 They were long queues at the gas station such as NNPC Mega station, Total, Oando and A.A Rano among others.

Some of the residents who spoke to the newsmen said it came upon them without any signal.  A motorist Sani Ali said. “We woke up this morning to discover the fuel scarcity without any sign.”

Many other petrol stations in the metropolis were not selling the commodity.

A black marketer, Hassan said the Jerry can of petrol he hitherto bought at N4,500 rose to N5,200.

Hassan noted, “the fuel started getting scarce yesterday night and you can see the situation today.”

A commercial motorcyclists Adamu Musa said they had to increase the fares as they got the fuel from black marketers.

“I cannot wait in the queue to get fuel because it is a waste of time and since I bought the commodity at an increased rate, I had to hike my fare depending on the distance, for instance, a drop that was N100 went to N150, that of N50 rose between N60-N70.

Bello an attendant at Oando filling station along Kano road, said they were not aware of scarcity before the long queue emerged Monday morning.