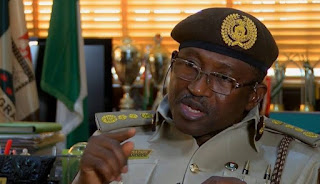 The Comptroller-General of Immigration, Muhammad Babandede, has vowed stiff punishment for any officer who connived with politicians to disobey immigration laws.

He said that politicians now pass through the borders without checks by immigration officers.

Babandede made this known during the decoration of 14 Assistant Comptrollers-General with their new rank in Abuja on Tuesday. The CG said 15 persons were being prosecuted for falsely claiming loss of their e-passports.

Advising the new ACGs, the NIS boss said, “I will like to task you to be more dedicated and supervise those who are working under you. You must be very vigilant and watch people who cross our borders.

“It is an offence under the Act, you are liable to punishment regardless of whoever you are. You and the officer involved will be prosecuted because officers don’t have immunity because it is a law that a person must present himself and pass through immigration.”

Babandede revealed that an immigration officer was facing criminal charges for assisting an applicant to procure a court affidavit in order to obtain an e-passport, warning that a NIS officer cannot be a regulator and a broker at the same time.