Plane crash: Osinbajo says my death would have caused trouble 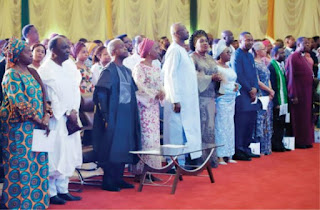 Vice President Yemi Osinbajo yesterday recounted his experience in a plane crash last month, saying if he had died, his death would have caused trouble for security and others.

The Vice President was on a campaign trail when his helicopter crash-landed in Kogi State on February 2.

He spoke during a thanksgiving service titled “The State House Thanksgiving Concert,” organised by the Aso Villa Chapel Abuja, to celebrate the re-election of President Muhammadu Buhari and Osinbajo.

Osinbajo said: “On February 2nd, God gave me a reason to know that but for his grace, we would have been consumed when our helicopter crashed. When the crash occurred, for a moment there was complete silence.

“For a second, it occurred to me that if we had died that is what it would have been, complete silence. But we all got out without a scratch.  God delivered us.

“God also delivered those in charge of our security, the government of Kogi State would have also been in trouble. We give God all the glory. I pray God will also be kind to you all also, that you will never be lacking in support, care and genuine prayers.”

“I’m constantly reminded by my wife that she wanted a quiet life, which I promised as an academic but here we are today. I know that I don’t have special qualification all the exaltation comes from God.”

The sermon of the day was delivered by an Assistant General Overseer of the Redeemed Christian Church of God, Pastor Ezekiel Odeyemi.

He thanked God for preserving Osinbajo and his family and recalled the apprehension that followed the general elections in the country.

The event was attended by former head of state, Yakubu Gowon, and his wife, Victoria; Governor Kayode Fayemi of Ekiti State, President of Christian Association of Nigeria (CAN) Samson Ayokunle, Secretary to the Government of the Federation, Boss Mustapha.