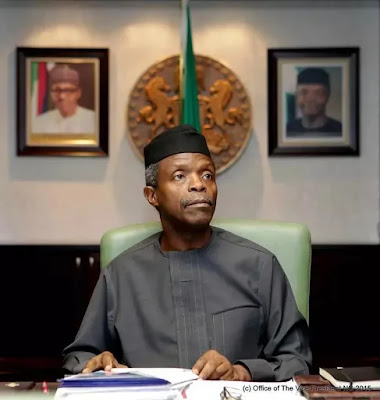 Vice President Yemi Osinbajo on Sunday at the Presidential Villa Banquet Hall said that his wife, Dolapo Osinbajo, had preferred a quiet life to the rigours of politics.

NAN reports that Osinbajo revealed this at a Thanksgiving Service organised by the Aso Villa Chapel to thank God for the re-election of President Muhammadu Buhari and Osinbajo.

“It is impossible to thank Him enough; I and my family have too many reasons to thank God.

“One day my wife and I reflected on how unlikely our journey here is.

“She reminded me that all she wanted was a quiet life as one of the many families of academics living on the University campus.

“If someone had said to me in 2013 you will be campaigning across the country;. you will win the elections and become Vice President of Nigeria I would, because I am generally polite, have said amen but in my heart, say what a crazy chap!

”Any one who knows how difficult it is to campaign for local government chairman and win, you will not find it difficult to accept that except the Lord build the house they labour in vain who build it.”

Osinbajo said he realised that he had no special qualification to be what he was today as he had enjoyed incredible promotion from God.

Citing Psalms 75:5,6, Osinbajo said “exaltation comes neither from the east, nor from the west nor from the south. But God is the Judge; he puts down one, and exalts another.”

He said that on Feb. 2, God gave him further reason to prove that his mercy was upon him.

The vice president said he was going to Kogi for a two day campaign tour when his helicopter crashed as it got in to land at Kabba, Kogi State.

He said it was God’s mercy that he and his crew came out unscathed.