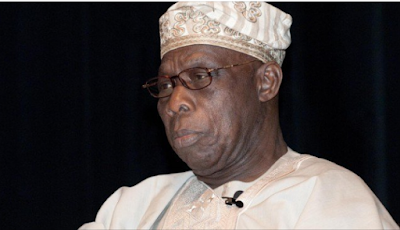 He made the call in an open letter to the former president he made available to journalists yesterday.

Tsav, also a former National Commissioner of the Public Complaints Commission Abuja, slammed Obasanjo for his alleged interruptions in the Nigerian political scene adding that, “making pronouncements at every point and countering or reversing himself on national issues in a manner that belittles his status, as elder statesman”.

He wrote: “In Nigeria or African generally, septuagenarian or octogenarian ages are like a double edged sword. It could be a curse or a blessing to someone depending on how he utilizes this special favour from God Almighty in spending these rare years of grace.

“They can be treasures of wisdom in their communities or nations. But the worse experience is when such people bow to the strings of senility and the instinctual drive of incoherence.

“The latter category is the problem with Nigeria’s former President, Chief Olusegun Obasanjo (OBJ). And his case seems on the wayward side because innately, he brooks no opposition to his views and parades a fake aura of superior wisdom.

“So, OBJ, the former Military and democratic leader of Nigeria has been restless on the political turf of Nigeria; making pronouncements at every point and countering or reversing himself on national issues in a manner that belittles his status, as elder statesman.

“His inconsistent utterances in recent years have earned him all manner of derogative epaulets. But it appears, OBJ has no sense of shame.

“Who was OBJ’s preferred candidate against Buhari in the 2019 presidential contest on the platform of the opposition PDP? Shockingly, it was the septuagenarian Alhaji Atiku Abubakar, his former deputy and a man he had several condemned, even in his published book, “My Watch,” as corrupt, dubious and someone “with shadowy ancestry,” at the expense of other younger generation candidates in the 2019 general elections.

“He may feel pained that Nigerians have overwhelmingly reelected President Buhari for another term. But the difference between OBJ and Buhari is that the latter does not use his powers indiscriminately and dubiously to secure leadership unlike the former.

“OBJ’s lone desire cannot surpass that of millions of Nigerians who prefer President Buhari and, at this stage silence from OBJ would be more golden.

“OBJ is not the only former President of Nigeria still alive. There are the likes of Gen. Yakubu Gowon; Gen. Abdulsalam Abubakar, and Gen. Ibrahim Babangida. But none of them is this excited on checkmating every shadow of the occupant of Aso Rock. And until recently, when he joined his ancestors, Alhaji Shehu Shagari was choosy in commenting on national affairs.

“There is potent evidence that OBJ has wronged God and needs to plead for His forgiveness. It is shameful that OBJ who is a supposed elder statesman will embark on such an empty voyage to satisfy his ego and pride. A genuine Christian ought not to be as vindictive as OBJ portrays himself everywhere. He needs prayers and God’s attention urgently.”