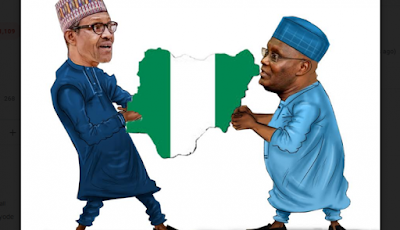 For those of us who had hoped against hope, the 2019 presidential election has proved to be the last straw. We are now convinced that Nigeria is a hopeless case. This country is not just a major disappointment; it is decidedly firmly on the trajectory of a future break up.

Today, the silence in the Nigerian political space is deafening. Just look back to 2015 and before, when there was a vibrant debate about almost everything under the sun. But now it is “siddon look.” We just had an election that was no election and more like selection. It was, even more, a mini civil-war, characterized by killings, voter-suppression and intimidation, ballot-snatching and falsification of results.

There was even a case where the electoral umpire claimed he was made to declare a false result at gunpoint. But in spite of the bogus outcome of the elections, nobody is fighting anymore. Nobody is burning tyres today or demonstrating in the streets. Instead, people are watching and waiting to see what will happen. Surely, this cannot be the end of the matter.

The so-called victors are jubilant, reading the eerie silence as mission accomplished. However, the omen is bleak and dire. It is always better when people express their feelings freely. That way, you know exactly where they stand. But when everything is bottled up as it is now, then you know we are in for trouble. Sooner, rather than later, the dam will burst.

There is definitely a cold war currently going on in Nigeria today, and it is a lull before the storm.

Only those who have been bought, or political sycophants looking for scraps of the stolen pie, are talking. They are giving back-slaps and high-fives to the phyrric victors. Meanwhile, wisdom and reason have concluded that Nigeria is a lost cause. No point waiting for another farce in 2023. Now is the time for all good people to leave the country; either physically or psychologically.

It is now clear that those who believe they have a future have no part in this failed and discredited state called Nigeria. To your tents, O Israel!

Those who make peaceful change impossible, make forcible change inevitable. But that is not to suggest military intervention is the answer. We have already done that and got the t-shirt. All the military did, in all their years in power, was to drag Nigeria through the mud. There is no point putting any hope in them again, after all, it is the same military men who hijacked the democratic system simply by taking off their uniforms and putting on agbadas.

Seeing the template established in this fraudulent 2019 election, the inevitable conclusion, at least to me, is that this Nigeria cannot survive. The message of the 2019 election is that Nigeria is doomed to disintegration. Things have fallen apart and the center cannot hold.

The message is that the powers-that-be are determined that we must be satisfied willy-nilly with incompetence. They say we must put up with economic failure. They insist on our new status as the poverty capital of the world is to be commended. They tell us returning Nigeria to major debt status is next-level achievement. They tell us to celebrate abject failure as glorious success.

If you were to believe the lie, our leaders have resuscitated the naira. They have nullified power blackouts. They have removed the petroleum subsidy. They have reduced the pump price of petrol. They have created millions and millions of new jobs. Our hospitals are no longer consulting clinics. Life and property is now secure in Nigeria. Our agricultural sector has been suitably revamped.

Our leaders have achieved self-sufficiency in food production in Nigeria. They have killed corruption in the land. They have rebuilt our roads and bridges. They have defeated Boko Haram and rescued the Chibok girls. They have restored the reputation of Nigeria in the comity of nations. As a result of these glorious achievements, the current government not only won re-election, it did so with a resoundingly bigger majority than before.

All this makes 2019 a major watershed in Nigerian political history. For some reason, hopes were rekindled during the campaigns; only to be dashed ruthlessly. The times are so bad, our situation so worrisome, that many presidential hopefuls came out of the woodwork. It was time to rescue Nigeria. It was time to change the dismal trajectory of the nation’s history.

Surely, even the blind can see that we cannot go on like this. Surely, these crop of current Nigerian leadership will be thrown out by a despondent electorate. It was time for a new page; a new departure. What we needed was our very own Mercutio proclaiming a plague on both the houses of our delinquent political establishment of the APC and the PDP.

So out came a new panoply of ambitious political mavericks, talking up public policy, debating the issues, offering new ideas for the renewal of the national mandate. Among these were Kingsley Moghalu, Oby Ezekwesili, Tope Fasua, Fela Durotoye and Omoyele Sowore. I shared their delusion in thinking the Nigerian political system was amenable change. I believed with them that we are all fed up with the status quo.

So they formed new parties, toured the country, pumped flesh, marshalled new agendas; only to meet their Waterloo at the discredited polls. They obtained or were awarded, an insignificant fraction of the millions of fabricated votes. So completely were they crushed that there is even talk now of making it difficult, if not impossible, for other parties to contest in future elections apart from the Tweedledee and Tweedledum of the APC and the PDP.

The message of our Caesars in Abuja is without ambiguity: there is no room for change in the politics of Nigeria. Under no legal circumstances will those who have ceased power by deception and subterfuge willingly relinquish it for the sake of some nebulous construct called democracy. To hell with power to the people, they insist on one accord. Power belongs to the professional politicians in Nigeria, and forever so shall it be.

The Nigerian electorate itself is no better inclined. God says in the scriptures about the Israel of old: “The prophets prophesy falsely, and the priests rule by their own power, and my people love to have it so.” (Jeremiah 5:31).

The 2019 elections show that a substantial number of Nigerians, especially in the North, are convinced this failed country called Nigeria is the best that Nigeria can be. Indeed, if the verdict of the doctored polls were to be believed, then most Nigerians are very much in love with this malignant Nigeria.

They love a Nigeria that is poverty-stricken, where our leaders are thieves, armed-robbers and pen-robbers, where beggars and vagabonds roam the streets, where the illiterate and the uneducated are the champions of public policy, where human life is worthless and people are massacred in numbers every day. Nigerians, according to INEC, adore a Nigeria where truth has fallen in the streets and justice is an orphan.

Never again. If there is anything to be learnt from the experience of the failed new idealists who ran for president in mushrooming parties this time around and lost their shirts; it is that Nigerian politics is a complete waste of time. The electorate has apparently never believed in the polls. They know their votes will not count. They know the only time politicians have any regard for them is during election campaigns.

So, if they can get a small bag of rice or garri from the charlatans running for office, or maybe even just 1,000 naira for their thumbprint, that will do just fine. If you can give them even more so they can attack polling booths in opposition strongholds and make away with the ballot boxes, they are ready. If you can give them lunch so they can incite a riot so an election being lost is declared inconclusive, they will do it. Thereby, the victor becomes the vanquished.

As a result, we will not see the idealism of 2019 come 2023, should this misnomer we call Nigeria still exist by then. The newcomers are once bitten, twice shy. Even now, by the time we came to the gubernatorial elections, after the farce of the presidential, Nigerians had lost all interest in democracy. Most people did not even bother to come out to vote again.

Of course, this did not prevent states like Kaduna from recording more fabricated votes in the gubernatorial election than even Kano did fictitiously in the presidential. In short, what we witnessed in the recently concluded election was the death knell of democracy in Nigeria.

So what is the answer?

More and more people are going to vote with their feet. The industrious and the enterprising are going to seek greener pastures elsewhere, having concluded Nigeria is a lost cause. They will go to Canada, to Australia, to those countries where merit is rewarded and excellence is the watchword. The smart ones who stay behind will start insisting on the dismemberment of this bogus contraption called Nigeria.

This is not a prediction: it is a warning. It is a call to arms. It comes from the realization that the Nigerian political system has now been programmed so that every election will now be decided by those whose votes can be bought with 30 pieces of silver.

The system has been rigged so that every election in Nigeria will now be determined by those who have filled the voting register with underage voters. So doing, your chances of being elected to high office are excellent if you are incompetent, a crook, or a thief to boot. Otherwise, you don’t stand a chance.

I congratulate all those who won infamous victories in the just concluded elections. But “send not to know for whom the bell tolls, it tolls for thee.”