9:57 AM CuteNaija 0 Nigerians in Diaspora, Sports 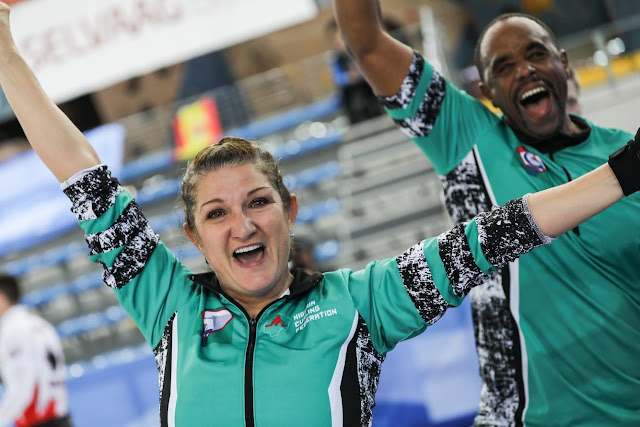 Tijani Cole and wife, Susana, defeated their French opponents 8-5 to help Nigeria become the first African nation to win a curling game at a world championship.

Nigeria capped off a historic appearance at the World Mixed Doubles Curling Championship 2019 with a milestone victory on Thursday April 25, the final day of round-robin games in Stavanger, Norway.

There we have it, a historic first-ever win for an African Member Association at a World Curling Championship. @CurlingNigeria 🇳🇬 have beaten France 8-5 in their last game of the #WMDCC2019.#curling 🥌 pic.twitter.com/L4n7p2YndP
— World Curling (@worldcurling) April 25, 2019

The win may not have been enough to qualify “Broomzilla” as they are tagged from Group C into the round of 16, considering they had lost all their previous games at Sørmarka Arena.

“Nigeria we did it for you,” Tijani told CBC Sports.

“All of our hard work has paid off. We did it,” Susana said.

“Watching it on the Olympics over the years was motivating for me and my wife. We’re both athletes and competitors,” he said.

“What a great dream to share this with your best friend, my wife,” Tijani said.

“You go through so many trials and tribulations. It’s been a long journey.”

“To all of my friends in Nigeria and the entire Nigerian Curling Federation, thank you so much,” Tijani said.

His wife echoed Tijani’s praise for those who helped them achieve this first-ever win.

“Thank you for believing in us,” Susana said.

The Broomzilla lost 2-13 to China on day one, followed by a frustrating 20-0 defeat to the Czech Republic on day two.

They scored two in the first end against Wales to secure an early lead on day three but eventually lost 4-10.

They then suffered a 7-4 defeat to Croatia on day four and lost 0-18 to Italy on day five before securing victory on day six.

The Coles first took up curling three years ago and they have been training rigorously over the past year to improve their skills for this big occasion.

The couple who live in Denver, prepared hard for the championship at the Denver Curling Club in Colorado, USA.