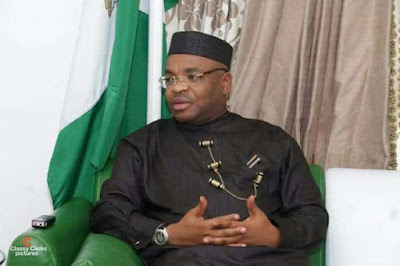 Akwa Ibom State Governor, Udom Emmanuel, has mocked prophets and pastors who predicted that he would not be reelected, describing them as ‘fake’.

Emmanuel spoke yesterday during a convention service at the Insight Bible Church Uyo, the state capital.

He warned the people to be wary of fake preachers and prophets as they are not called by God.

His words: “I wasn’t invited to this convention. I just told my team we’ll be worshiping at Insight Bible Church.

“My wife comes here once we don’t have any state function to attend.

“As a Governor, I’m a member of every Bible-believing church where the truth is preached, not those fake churches.

“There are those ones that said Udom Emmanuel will lose election.

Emmanuel attributed the 2019 victory to the awesome power of God in the affairs of men and thanked God for defending His name and upholding the confidence of those whose trust in Him.

“I thank God for guaranteeing us victory, this further attests to our belief that those who put their trust in God cannot be forsaken.

“It has also boosted the confidence of our people in the awesome power of God,” he said.