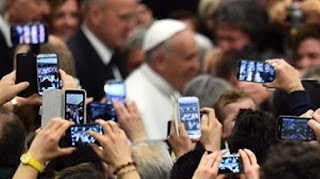 Young people should not always be glued to their mobile phones, the 82-year-old Pope Francis said on Saturday as he met a group of Italian teenagers.

“Free yourselves from mobile phone addiction, please, “ Francis said during a Vatican audience to pupils from Visconti, a renowned state high school in central Rome.

“You’ve certainly heard about the tragedy of addictions, but the one with mobile phones is very subtle, very subtle,’’ the pontiff said, according to an official transcript.

“Mobile phones are a great help, a great progress. They should be used, it’s good that everybody knows how to use them. But when you become a slave to your mobile phone, you lose your freedom,’’ he said.

Francis urged his audience to “not be afraid of silence, of being on your own, not always, no, because that’s not good for you but take some time to be on your own.’’

Back in 2017, the pope complained about the use of mobile phones during Mass, saying it made him “very sad’’ to see people holding them up during religious services, including “many priests and bishops.’’

“Please! Mass is not a show!’’ he said at the time, recalling that the priest who celebrates Catholic Mass “says ‘Lift up your hearts,’ and does not say ‘Lift up your mobiles to take a picture.’’