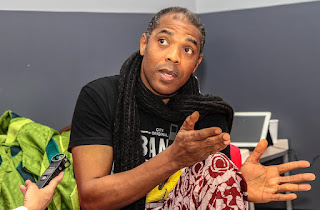 Nigerian Afro-beat star, Femi Kuti, has called for broad reform of the Nigeria Police Force (NPF) which he said requires a complete reorientation.

Kuti stated that he believes the Police Force is important to decreasing crime but must work for law-abiding Nigerians, not against them.

Femi made this known yesterday while addressing the media at the New Afrika Shrine, Lagos where a protest against Police brutality took place.

The protest was in reaction to the fatal shooting of Kolade Johnson, a 36-year-old who was killed on Sunday, March 31, 2019, by operatives of the Special Anti-Cultism Squad (SACS) in Lagos State in the Mangoro area of Lagos.

According to Kuti, the protest was not an effort to undermine or scrap the Police Force but to demand a reform of the system that’ll make it work in the interest of the people and not kill them unlawfully.

Describing Kolade’s fatal shooting as one of the too many sad extremes of the Force that should not be condoned, Kuti said a change was important.

“We’re not against the Police. We’re saying the complete orientation of the Police must change into positiveness.

“We’re not saying scrap the Police Force, of course, there’ll be crime. If Police is properly equipped then Police can protect us against crime,” he said.

In addition, Segun ‘Segalink’ Awosanya, an activist and major campaigner against Police brutality, called for the scrapping of all ‘killer’ Police squads in the country.

While addressing the group of protesters yesterday, Awosanya said killer squads in the Nigeria Police Force have been working against the interest of the Nigerian people for too long and must be stopped.

“When our country is saddled with a Police Force that operates outside the bounds of law, without operational restraint, what we get are not only killer squads that reign supreme but a Police Force that has gone rogue killing and maiming defenceless citizens.

“The lives of all citizens matter and we must continue to demand that men and women of the Police Force respect the sanctity of life and the lives of all Nigerians.