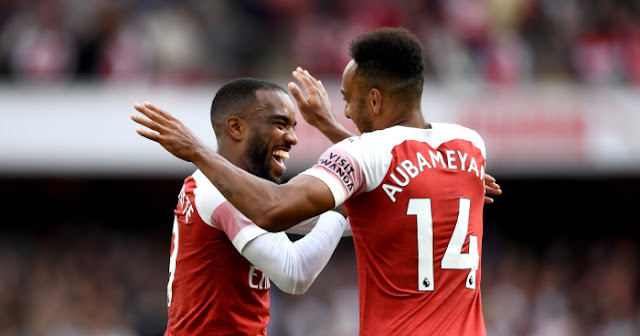 Arsenal moved above Tottenham into third in the Premier League table with a 2-0 defeat of Newcastle United on Monday.

Aaron Ramsey, bound for Juventus after this season, struck his fourth league goal of 2018-19 before Alexandre Lacazette settled a somewhat scrappy encounter at Emirates Stadium.

Unai Emery's side were far from their best, but Ramsey's display while wearing the captain's armband was significant, and his departure with an apparent injury in the second half will come as something of a worry.

Newcastle, who rarely threatened Bernd Leno's goal, remain seven points above the bottom three despite a 12th league defeat in their past 13 meetings with the Gunners, which was confirmed by Lacazette's lobbed finish seven minutes from time.

Arsenal thought they had the lead 13 minutes in through Ramsey, but his close-range finish was disallowed after Sokratis Papastathopoulos pulled over Florian Lejeune.

Ramsey had better luck half an hour in, though, sweeping a left-foot shot away from Martin Dubravka and in off the right-hand post with the first registered shot of the match.

Salomon Rondon had Leno a little worried with a low effort, but only a brilliant goal-line clearance from Matt Ritchie stopped Lacazette from rifling in Arsenal's second just before the break.

Arsenal's dominance of the ball continued after the interval, but chances seemed hard to come by, with Dubravka making his first save of the match 73 minutes in from a stinging shot by Pierre-Emerick Aubameyang.

Just as Newcastle began to threaten a leveller, Lacazette pounced on some hesitant defending from Jamaal Lascelles to lift the ball over Dubravka and secure the points.

This was Arsenal's 10th win in a row in the league at the Emirates, and it puts them two points above Spurs and Manchester United with seven games to go.