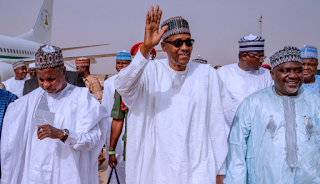 President Muhammadu Buhari will attend the World Economic Forum holding in Jordan and the Investment Summit scheduled to hold in Dubai.

According to a statement issued by the Presidency and available on its verified Twitter handle, Buhari would be accompanied on the trips by Governors Abubakar Badaru, Abiola Ajimobi and Yahaya Bello of Jigawa, Oyo and Kogi States respectively.

Others on his entourage include Minister of Foreign Affairs, Geoffrey Onyeama; the National Security Adviser, Maj. Gen. Mohammed Babagana Monguno (rtd), and other top government officials.

The Presidency revealed that Buhari would deliver an address at the opening of the plenary alongside King Abdullah II bin Al-Hussein and United Nations Secretary-General, António Guterres, and join world economic leaders in an informal gathering at the King Hussein Bin Talal Convention Centre.

The ninth edition of the Annual Investment Meeting will hold between April 8 and 10, 2019.