APC reacts as Saraki says senators should decide their leaders 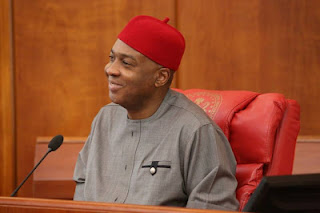 The President of the Senate, Bukola Saraki, has advised political party leaders to allow elected federal lawmakers to choose their leaders on the day of inauguration in order to achieve stability of the 9th Assembly.

Though he did not mention any political party, observers believed that he was directing the advice to the ruling All Progressives Congress leadership whose members will be in the majority in the 9th National Assembly.

Reacting to Saraki’s counsel, the APC on Monday evening told him and members of the minority party to mind their own business in an apparent reference to the Senate President and his party, the Peoples Democratic Party.

Saraki had given this advice during an interview with journalists on Monday shortly after he presided over the first lecture delivered by the Clerk to the National Assembly, Mohammed Sani-Omolori, on the overview of the National Assembly structure at the ongoing orientation programme for newly elected federal lawmakers in Abuja.

Saraki decried the politics around the process of electing the presiding officers of the national legislature.

He said, “The point I am making is that we should not make too much noise on the process of electing presiding officers. What is important is for the members of the Senate to decide who is the best to lead them, so that they can have stability.”

Saraki, who was the chairman of the first lecture, also emphasised on the lecturer’s statement that elected lawmakers had no business attending meetings outside the National Assembly on the day of inauguration.

Declaring the programme open, Saraki reminded the fresh parliamentarians “to exhibit courage in discharging their activities and do what is right, in the interest of Nigerians.”

He said, “Let me add that, since the interest of the people is paramount, legislators must have the courage to follow their own mind, guided by what is right.

“The 8th National Assembly made a lot of interventions on everyday human issues affecting Nigerians, be it unfair price hikes, examination malpractices, and sexual harassment in our educational institutions.

“We also address the drug problem ravaging our communities. I encourage you also to take a keen interest in the welfare of Nigerians, and to be a voice for those in need of similar interventions.

“In carrying out constitutional functions, lawmakers must always recognise that the independence of the legislature is non-negotiable. It is an independent and co-equal arm of government.

“Therefore, it behooves members of the National Assembly to lead the way in asserting the principle of separation of powers, thus ensuring accountability in governance.

“To achieve that, it is expected that members will carry out their duties in a manner that commands that respect from other arms of government as well as the people you represent.”

“The Nigerian National Assembly is far from unique when we talk about this problem of perception. All over the world, studies have shown that the legislature is often the most misunderstood arm of government,” he added.

But the APC has asked Saraki and other members of the Peoples Democratic Party to mind their own business as far as the election of principal officers of the National Assembly is concerned.

The party’s National Publicity Secretary, Lanre Isa-Onilu, said this in an interview with one of our correspondents on Monday.