APC did not zone DSP position to South-South – Oshiomhole 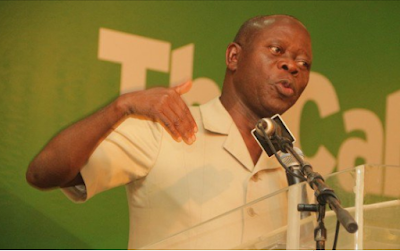 The Chairman of the All Progressives Congress (APC), Adams Oshiomole, has laid to rest media reports suggesting that the party has zoned the position of Deputy Senate President to the South-South.

He said the party was yet to zone Senate key offices, including the office of Deputy Senate President.

Oshiomole also denied reports that he was planning to zone the position of Deputy Senate President to Edo North senatorial district.

Through his media aide, Mr. Simon Egbebulem, Comrade Adams Oshiomohole said, “Nothing has been done. Nobody has said this is the person for that position. But the party is working on how to share the position so that every part of the country will have a sense of belonging.

“They have started the process and the party is backing Gbajabiamila and Ahmed Lawan for the position of Speaker and Senate president but other positions, the party is still working to sort out these positions”.

This development has thrown up high level lobby amongst the three regions, South-East, South-West and South-South, jostling for the position of Deputy Senate President.

Responding to the report, media aide to senator representing Ekiti North senatorial district, Senator Duro Faseyi, Mr. Adedeji Daramola said Senators from the South-west were working round the clock to get the DSP slot.

His words: “Though my boss is not returning, the Senators from the Southwest are pushing for the DSP slot in the 9th Assembly.”

Senator Francis Alimekhena
The Edo born lawmaker is representing Edo North senatorial district. He is the Deputy Chief Whip of the 8th Senate. He is returning to the 9th Senate as a second timer and he hails from the same zone with the APC National Chairman, Comrade Adams Oshiomole.

The Deputy Chief Whip has been subject of criticisms by APC members and groups. He was accused of failing to promote and defend the interests and policies of the APC-led Federal government in the 8th Senate.

Senator Robert Ajayi Boroffice
He represents Ondo North senatorial district. He is returning to the 9th Senate as a third timer. He is the Chairman, Senate Committee on Science and Technology. He is a member of parliamentary support group for President Muhammadu Buhari.

Boroffice was recently endorsed by a group of Northern senators-elect for the position of Deputy Senate President.

Senator Oluremi Tinubu
She is the wife of the National leader of All Progressives Congress, Asiwaju Ahmed Bola Tinubu. Representing Lagos Central Senatorial district, she is returning to the 9th Senate as a third timer.

The main factor working against her ambition is the reported endorsement of Hon. Femi Gbajabiamila by the party to succeed Hon. Yakubu Dogara as Speaker of Federal House of Representatives. Femi is a political godson of Oluremi’s husband, Ahmed Bola Tinubu. Both Femi and Oluremi hail from the same senatorial district, Lagos Central.

He represents Delta Central Senatorial district. He is returning to the 9th Senate as a second timer. He was an active member of parliamentary support for President Muhammadu Buhari in the 8th Senate. His candidature was recently nullified by the Federal High Court in Asaba.

The case is a pre-election matter that would traverse through Appeal Court and the Supreme Court.