9th assembly leadership: Why zone to an individual? 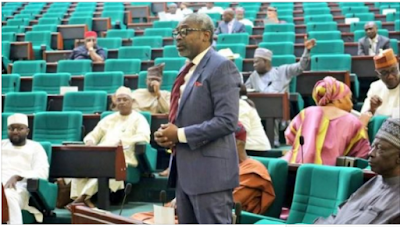 As expected in a presidential democracy after a fiercely-fought general election, which was won by the ruling All Progressives Congress, APC, the battle ground has shifted to the sharing table of the booty. Of course, the National Chairman of APC, Comrade Adams Oshiomhole, and the National Publicity Secretary, Lanre Isa-Onilu, had warned their party men and women that the game was a winner-takes-all, thus making it clear to the opposition parties in the Legislature that there was nothing to share with the majority party in the choosing of principal officers in both the Senate and the House of Representatives.

“My emphasis is on the fact that we are not going to share powers, including what the PDP people call juicy committees and we call strategic committees, with people that Nigerians have rejected. They are exclusive for the APC”, Isa-Onilu, had barked out at a recent press conference.

If you think that the apparatchiks in the ruling party are vehemently fighting to protect the interests of their members in the legislature, you’re dead wrong. And if you believe that this post-election hysteria and even paranoia for the PDP in the run-up to the inauguration of the 9th Assembly is down to the experience four years ago, you miss the plot too.

There is really nothing altruistic in the insistence of the APC leadership that Senator Ahmed Lawan must be elected the next president of the Senate. And in the same vein, there is no overriding national interest recommending Hon. Femi Gbajabiamila as the next speaker of the House of Representatives. Both men are qualified for the different positions – just like their other colleagues! In fact, feelers from the senators-elect, for instance, seem to contradict the tyrannical imposition of Senator Lawan on his colleagues. If the APC leadership does not have ears to the ground, they might be rudely shocked again. As it appears, many of of the APC senators – and even PDP senators – for different reasons think that Ali Ndume rather than Lawan has defended the APC position in the Senate with everything in him both in the day and at night and therefore prefer him to be elected as Senate President! This is the kind of danger inherent in zoning to an individual rather than to zones or regions.

If the APC leadership can pretend that it zoned the Senate presidency to the Northeast, and not to Ahmed Lawan, there is no room for such pretence in the alleged zoning of the speakership to Hon. Femi Gbajabiamila. And the reason is quite obvious for even a blind man to see. Whereas the entire Northeast has nothing to hold on to so far, the Southwest region already has in its kitty the office of the vice president. And when it is considered that the President in his second term has exhausted his constitutional opportunity for re-election to the same office, the import and the opportunities in the office Professor Yemi Osinbajo holds in the name of the Southwest cannot be overemphasized. Now, tell me how anyone can justify overloading the Southwest yet with another position of speakership when zones like the North-central and Southeast have nothing in the national power-sharing formula?

Therefore any mention of Gbajabiamila in the race for the position of Speaker in the 9th Assembly not only offends the principle of equity and justice but also offends the very logic of winner-takes-all of the leadership of the APC. It offends the logic in the sense that regions are partly rewarded on the bases of the votes they contributed to the victory of the ruling party. This perhaps explains why a large zone like the Southeast even in the face of obvious inequity is only making a half-hearted demand in the APC zoning formula. Yet the same cannot be said of the North-central that played a key role in the first coming of the APC to power in 2015 and has remained steadfast even in the face of mistreatment by the Federal Government, especially in the several deathly herders-farmers clashes. Even in the just-concluded general election, the North-central zone gave more votes to Buhari and the APC than the Southwest!

Let nobody be deceived by the propaganda that there are precedents in the past justifying the simultaneous holding of the offices of the vice president and speaker by a particular zone. Yes, in 1979, Chief Alex Ekwueme from Anambra state was the vice president while Chief Edwin Ume-Ezeoke from the same state was the Speaker of the House. The truth, however, is that there was a power-sharing accord between the ruling NPN and its alliance partner, NPP. So, whereas, Ekwueme was of the NPN, Ume-Ezeoke was of the NPP, and the emphasis of the sharing formula then was between two parties whereas now it is among regional zones. Even then, the country was not as divided as it is now with all manner of fault-lines crying to be attended to.

Let it be known that the greatest danger of what APC has done in zoning to individuals rather than groups is that it undermines national solidarity and even group interests. What is APC afraid of in allowing a zone that a position is ceded, to arrive at a consensus on who they have chosen themselves? Surely that is more democratic and a political party in power has the added responsibility of showing good democratic examples by following the due process.

Even then, all this “it must be Lawan or it must be Gbajabiamila” by the leadership of APC may in fact be a euphemistically-designed plot to allow only one individual to decide for a whole nation of over two hundred million people who becomes President of the Senate, Speaker of the House and logically afterwards the committee chairpersons in his bid for the presidency in 2023. This same powerful individual has already conquered the APC by planting his vassal as party chairman and so the next level is to conquer the government. Who noticed that someone is already grandstanding publicly as an alternate president advising on policy matters? Even then, our country is certainly too great to be reduced to a footstool of one individual, no matter how powerfully he looms!