Why I want to be Senate President -Senator Ahmed Lawan 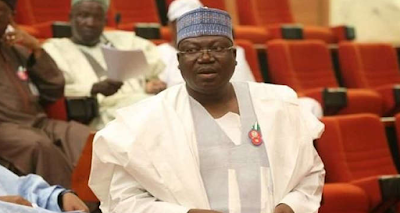 A front line contender for the Senate President, Senator Ahmed Lawan, on Saturday gave reasons why he is most suited to occupy the exalted position.

Lawan told journalists in Abuja that the Senate under his watch will work in partnership with the executive arm of government to make the country better through legislative engineering.

The Yobe North Senator, who spoke in company with some of his colleagues, believed that the All Progressive Congress (APC) by its clear majority in the Senate was positioned to produce the Senate President.

Lawan, who is also the Senate Leader, noted that the briefing was essentially to declare that he has something unique to offer as the Senate President of the ninth Session.

He said that there is need to emphasise the necessity to make the Senate more productive and more focused in its legislative business.

He said, “This interaction is important. After the elections, the APC emerged as the party with the majority. We thank God. APC will be in the majority from 2019-2023.

“In fact, we have made more progress than we did in 2015. We have about 65-66 senators-elect. Just like in 2015 when we sought to lead the Senate, we have come to the conclusion that we have something to offer by leading the Senate and the entire National Assembly.

“We are not under any illusions. We know that this requires a lot in terms of momentum and work we have to do to make Nigeria better through legislative interventions. Also by working with other arms of the government.
“You have known us for a long time. You know our strengths and weaknesses. We need to project what we want to offer.

“We need to tell Nigerians what we can do. We need everyone in this journey of four years we will embark on soon.

“I am asking for cooperation, support and understanding of everyone. We want to work for everyone to ensure that Nigeria is better and ensure that we receive the fairest deal from government.

“By the grace of God, we make serious positive changes. Nigerians voted for change. They have renewed their commitment to APC this year. It means that Nigerians have faith in us. I thank Nigerians for keeping faith with us in this dispensation.

“What we are doing is to reach out to our colleagues, either elected or outgoing. We are talking to them about our mission and why we are campaigning to lead the National Assembly.
“We are telling them why we need to make the Senate more productive and more focused. APC senators are so critical.

“We are reaching out to senators from other political parties. We are going to be talking about it much later.

“Let me say that we are senators who believe in party supremacy. We believe in the leadership of our party. The leadership we are seeking is that of the Senate and the National Assembly.”
On how to avoid the June 9th, 2015 experience when Bukola Saraki emerged Senate president against the position of the APC that had majority in the Senate he said: “APC must have learnt it’s lessons. The leadership of the party will do something differently.

“I am sure that our leaders will manage the huge success of APC. The party will find us very compliant and supportive.”

Asked what in specific terms, Nigerians should expect from him if he emerges the Senate President, he said:

“This is the most basic issue. Let me say that I believe in what my party does. The current President campaigned on security, anti-corruption and the economy.

“We have remained consistent as a party and an administration. Our main task will be to support the President and the party to implement the campaign promises.
“We want an economy that will ensure an all inclusive growth. Our main constituency as a progressive party is the ordinary people.

“It doesn’t means that the elite are not with them. But those who worked for our success are those ordinary people. It is crucial for our administration to come up with programmes that will make life better for us.

“We will also support those in the private sector so they can create jobs. We have worked hard as a government in the last four years. We want to work harder going forward so that our youths can get jobs that will grow the economy.

“We have social investment programmes. We will have some reforms in that sector so it can deliver well. Agriculture is one area we have worked on.

“Today, Nigeria doesn’t import rice anymore. What that means is that, the billions of dollars spent on importation are now within this country. In every part of the country, we produce so much rice. That is wealth creation. Even though we have challenges in that area, we have done well.
“We have areas of concerns in the security sector. We need to support the Executive to always ensure that we improve on it.

“When we came to government in 2015, so many parts of the country were under the control of Boko Haram insurgents. We want to see a situation where the security architecture of the country can be reformed.
“I headed the security architecture ad-hoc committee in the Senate. We submitted our report. The report recommended reforms in our armed forces.

“It is not about giving money. We must have a structure that will utilise monies released prudently. Where the Executive feels they need intervention, we will legislate.
“It is our mission to ensure that this administration continues to fight against corruption. Most of the things we are suffering in this country, it is because people have stolen public funds.

“When you are able to curtail the excesses in that regard, we will move forward. We should be proactive. We will legislate to ensure that it will be difficult for people to steal in the public and private sectors.
“As a country, why can’t we have an anti-corruption court? We need to fast track legal processes and ensure that those found guilty of any corruption charges are jailed instead of waiting for up to 10 years.

“This gives the people the confidence to steal since they know that our anti-corruption laws are weak.
“These are areas we will focus on. We will focus on our education. We will review it to conform with the current day reality.

“We will ensure that our graduates get a good deal. We will look at law reforms. Those that require total overhaul will get that.

“We have to have a bipartisan chamber. We will disagree from time to time because of some issues. But because we are senators of the Federal Republic of Nigeria, we will remain united. I was in the opposition for 16 before we became part of the party in government. Even as an opposition, we knew when to oppose and support the government.

“Take for instance security. Is there any senator who will oppose the improvement on security? We will work to achieve the desired unity. There will be equity and fairness in the chamber. Once we unit around national interest, we will contribute meaningfully to governance.

“We will do something to support the Executive. By the way, who said we will never disagree with the Executive? By design, we are meant to disagree. But when we disagree, we should sit down and look at issues. Every issue must be based on national interest.”