What Amosun, Okorocha’s suspension will do to our party on March 9 election – APC 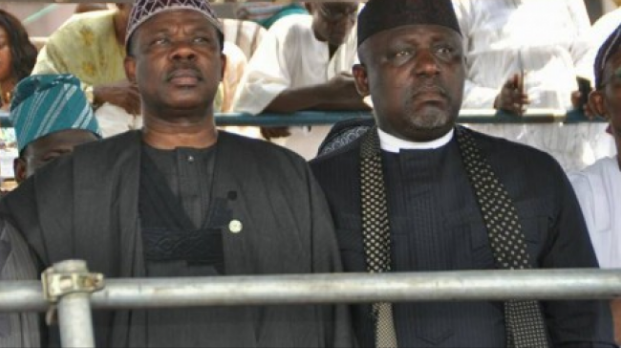 The All Progressives Congress (APC) says the suspension of governors Rochas Okorocha and Ibekunle Amosun of Imo and Ogun respectively, will not affect the party’s victory in the March 9, Governorship and State House of Assembly election.

Malam Lanre Issa-Onilu, the APC National Publicity Secretary, gave the assurance while speaking with the News Agency of Nigeria (NAN) on the development on Friday in Abuja.

NAN recalls that the APC National Working Committee (NWC) at its Friday meeting, suspended Okorocha and Amosun, alongside the Director General of Voice of Nigeria (VON) Osita Okechukwu and the Minister of Niger Delta Usani Usani.

“As to the effect it will have in the coming Governorship and State House of Assembly elections, the real negative effect will come when we allow our members who are in position of influence to undermine our candidates.

“We need to get it clear to every member who supports such actions that the party is watching them, and similar fate may befall them,” Issa-Onilu said.

He added that the suspension of the governors would not have come to the public as a surprise following their anti party activities over a period of time.

He recalled that the two governors had been sponsoring candidates against those recognised by the party.

This, he said, had been ongoing and so the party had to follow the right procedures; taking steps to first get them to see reason why they needed to retract their steps.

NAN recalls that in Ogun, Amosun is said to be backing AbdulKadir Akinlade, the governorship candidate of the Allied Peoples Movement (APM) against APC’s Prince Dapo Abiodun.

In Imo, Okorocha is supporting his son-in-law Uche Nwosu, the candidate of the Action Alliance, against Senator Hope Uzodinma, the APC candidate.

“They occupy the position they are in today, courtesy of the ticket given to them by this party, to now use that opportunity to work against the interest of the party, you do not expect the party to look the other way.

“More so when you realise that APC is a party of discipline that has come to establish the fact that to deepen democracy, you must subject everybody to the rule of law, and that there must be equality for all before the law,” he said.

Issa-Onilu stressed that as far as the APC was concerned, no matter what position an individual held, the party would not give him any leverage when he flaunted the rules or the Constitution of the party.

He added that the party’s leadership had at a point, issued queries to the two governors and cautioned them against their anti party activities.

He recalled that when the APC presidential campaign train was led by President Muhammadu Buhari to Ogun, they were thoroughly embarrassed by a different party.

Issa-Onilu said this was done with the support of the governor, who he said, brought in certain elements who were not APC members to the campaign venue to create problems.

“This actually embarrassed our President, but we thought at that period, we were facing the Presidential and National Assembly Election and that it was not the appropriate time for us to do anything that might be destructive to our course, so we waited,” he said.

He added that though there was a window for the governors to show remorse and act appropriately to convince the party’s leadership that they would play by the rules, they never did.

He said rather Okorocha and Amosun came out openly to endorse their choice candidates against the party’s candidates.

“Which ever way you look at it, that is anti-party activity, it is beyond the limit, and tolerating such, will mean that our change mantra is just a mantra without meaning,” the APC spokesman said.