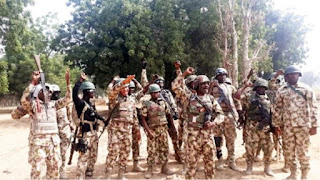 Troops repelled Boko Haram at Michika in Adamawa on Monday and inflicted heavy casualty on them.

A statement by the army spokesman, Col. Sagir Musa said the terrorists attempted to infiltrate the town at about 7.20 p.m. but troops blocked and engaged them on two fronts.

Musa said many of the insurgents were neutralised, while others fled in disarray due to superior firepower.

He said they “hastily evacuated most of their corpses (dead colleagues) under the cover of darkness.”

The army spokesman, however, said the entire area had been dominated by troops, adding the situation was now under control.

He said items captured from them terrorists included one Ford vehicle, two Toyota Starlet vehicles loaded with foodstuffs, one motorcycle and one tyre inflating machine.

According to him, further exploitation is to be conducted this morning.

He said calm had been restored in the town and urged the people to go about their businesses but report strange persons in their localities to security agencies.