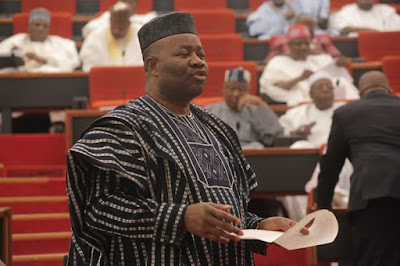 Godswill Akpabio, senator representing Akwa Ibom north-west, says some clergymen in Akwa Ibom state have been casting aspersions on him since he defected to the All Progressives Congress (APC).

In August, 2018, Akpabio who was minority leader at the senate, resigned his position and renounced his membership of the Peoples Democratic Party (PDP).

Responding to how his critics have taken his decision to join APC, Akpabio said his defection overshadowed every discussion in Akwa Ibom state and cast a spell of fear over the PDP who started paying clergymen to lie against him.

“I am happy that God is not like some of His priests,” he wrote in an article.

“Ever since I decamped to APC, they have been praying against me and they have joined in peddling the lies about me. Very well known Church prelates and Bishops that dined with me for 8 years while I was governor, despite my benevolence to them and their families joined the fray calling me killer herdsman for joining APC.

“The clashes have occurred under various leadership. Yet the “men of God” have been unconscionable in accusing the current President of masterminding genocide against Christians because he is a Muslim. I am happy that God does not condemn a man based on one man’s testimony, but He sees the heart and judges our motives and intentions. Whether one is a Christian or Muslim, we all worship the same God WHO will at the appointed time judge us from our deeds in words and actions.”

Akpabio said in the course of this election, he had been photo-shopped by propaganda merchants who told the lies about him. He said his letterhead and signature had been forged by the same merchants to write falsehood as if he wrote them.

He alleged that they conscripted women from South Africa who claimed to be foreign observers and paid them to lie that he detained them using thugs.

Akpabio also said he met Udom Emmanuel , governor of the state, performing the duties of a deacon in Qua Iboe Church, Surulere , Lagos, and he immediately adjudged that as a deacon, he would superintend over the affairs of the state with the fear of God.

“Whether I was right or wrong is for history to judge. Nevertheless I picked him to succeed me and by the grace of God and the votes of Akwa Ibom electorates, he won the election. So God made him governor,” he said.

The senator, who lost his reelection bid, is currently at the tribunal.