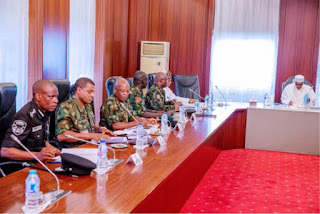 Security chiefs have kept mum after briefing President Muhammadu Buhari on the country’s security situation at the Presidential Villa, Abuja.

The meeting which started by 11:00am lasted till around 2:00pm with all the country’s security chiefs in attendance.

Others were the Secretary to the Government of the Federation, Boss Mustapha, National Security Adviser, Babagana Monguno; Minister of Defence, Mansur Dan-Ali; the Director-General of the National Intelligence Agency (NIA), Ahmed Abubakar, acting Inspector General of Police, Mohammed Adamu and the Director General of Department for State Service (DSS), Yusuf Magaji Bichi.

At the end of the meeting, they left without speaking to journalists.

It will be recalled that on the March 5, this year, when a similar meeting was held before the governorship and state assembly elections, the acting IGP addressed the journalists.

Our correspondent reports that when the acting IGP was leaving, journalists were told that, “no briefing today.”

However, it was gathered that the insecurity in some parts of the country and the Saturday’s supplementary polls in five states were discussed at the meeting.