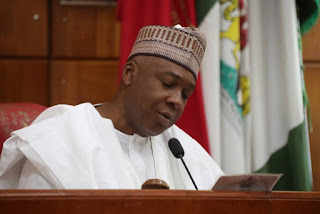 Senate President Bukola Saraki and 216 lawmakers not re-elected in the recent National Assembly elections are to receive severance allowances amounting to N1.3bn, an investigation has shown.

Other prominent lawmakers that would be entitled to the severance package are a former Senate President, David Mark; a former Minority Leader, Senator Godswill Akpabio; and an entertainment entrepreneur, Senator Ben Murray Bruce, as well as Senator Binta Garuba.

A former Chairman of the Peoples Democratic Party, Barnabas Gemade, and 2019 All Progressives Congress governorship candidate in Ebonyi State, Sonny Ogbuorji, are also on the list.


Some of the lawmakers did not seek re-election; some lost the nomination of their parties while some lost the National Assembly elections.

On the other hand, a non-returning member of the House of Representatives is entitled to N5,955,637.5.

There are 66 senators and 151 Reps who will not be making it back to the red and green chambers, respectively in the 9th National Assembly expected to be inaugurated on June 6.

Similarly, the 151 Reps will be paid a total of N899,301,262.5 to bid farewell to the National Assembly where they had worked, at least, in the last four years.

There are other allowances that the lawmakers are not paid directly but provided and paid by the government. These are special assistants, security and legislative aides.

What this means is that those engaged in these capacities are paid directly by the government as the allowances cannot be claimed by political office holders. These allowances apply to senators and Reps.

Medical expenses are also undertaken by the government when they have a need for the services.

For a member of the House of Representatives, the tour duty allowance is N35,000 per night; the estacode is $900 per night.

There had been attempts to review the allowances of lawmakers, which some Nigerians consider as outsized compared to the nation’s economic situation.

However, each attempt made by the Revenue Mobilisation Allocation and Fiscal Commission to review the allowances had never worked out.

According to the prescription of the subsisting law, senators’ allowances total N18,642,880 on an annual basis. The allowances received by each senator are nine times higher than the official annual salary they receive. The salary is pegged at N2,026,400 per annum.

For members of the House of Representatives, the annualised allowances are about eight times higher than the annual salaries.

There are also other allowances not included in this calculation that are paid not at any fixed periods but as many times as they occur in the year.

Basically, both senators and Reps are paid the same percentages of their salaries as allowances except in constituency allowance where senators are paid 250 per cent while Reps are 100 per cent.

Apart from the documented allowances, some hefty earnings of lawmakers have remained hidden.

Senator Shehu Sani sometime in 2018 removed the lid when he disclosed that each senator received N40.5m every quarter as running cost. This amounts to N13.5m a month.

Similarly, a Rep gets about N30m a quarter as running cost.