Reasons why we suspended governors, Okorocha and Amosun - APC 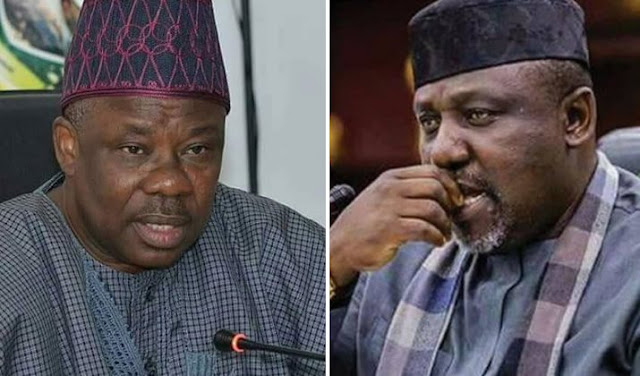 The All Progressives Congress (APC) has explained why it suspended Ibikunle Amosun, governor of Ogun, and Rochas Okorocha, governor of Imo.

It can be recalled that the duo were suspended by the national working committee of the ruling party on Friday.

In a statement on Friday, Lanre Issa-Onilu, APC spokesman, said the two governors were suspended over anti-party activities.

“The national working committee (NWC) of the All Progressives Congress (APC) has suspended the Governor of Ogun state, Ibikunle Amosun and the Imo state governor, Owelle Rochas Okorocha for anti-party activities,” he said in a statement.


“The NWC has also taken a decision to recommend the expulsion of the suspended individuals to the national executive committee (NEC) of the party.

“The NWC has also issued a query to the governor of Ondo state, Rotimi Akeredolu over his glaring anti-party activities, which greatly affected the fortunes of our candidates in the recently-conducted presidential and national assembly elections in the state.

“Recall that the NWC had earlier written to the suspended governors on their anti-party activities, and several other steps were taken to ensure they desist from taking actions that are inimical to the interests of our party and candidates. Notably, these individuals have not shown any remorse and have actually stepped up their actions.

“The party reviewed the serial anti-party activities of the concerned individuals before and during the last presidential and national assembly elections in their respective states and resolved to enforce party discipline in line with our constitution.

“The NWC noted how the suspended members have continued to campaign openly for other parties and candidates that are unknown to our great party, even while they have constituted themselves to opposition to APC candidates in their respective states.

“Importantly, the NWC is closely monitoring the activities of our members across the country, and particularly, in the states these suspended members belong to.

“We wish to reiterate that any member of our party who takes any action solely or in line with the directives of the suspended members to undermine our party’s candidates in the coming governorship and House of Assembly elections would face disciplinary actions.”

The APC spokesman asked the members of the party to disregard directives of the suspended persons.