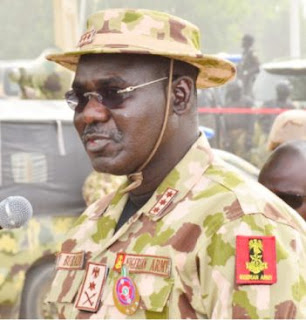 The Chief of Army Staff (COAS), Lieutenant General Tukur Buratai has said the post-election crisis was one of the remote causes of the Nigerian Civil War, which took place between 6 July 1967 to 15 January 1970.

Buratai made this known yesterday when he received a delegation from the European Union (EU) election observation mission for the 2019 general elections, led by its Deputy Chief Observer, Hanna Roberts.

He noted that Nigeria’s history has examples of insecurity, following the post-election crisis, noting that if proactive measures are not taken it could destabilize the country.

He said, “The election history over the years, the outcome has been volatile. One of the remote causes of the civil war was as a result of the election crisis at the time.”

He said having learnt our lessons from history, the military would be proactive and ready to support the police and government to forestall crisis.

He noted that the international community would not like to see a destabilized Nigeria, where the lives of foreigners and Nigerian are in danger.

He said the impression created in some quarters that the military is interfering in the electoral process is not true.

Buratai said only those who benefit from insecurity would cry against the military supporting the police to secure elections.

He said the Army is not directly involved, but on standby to support the police and other security agencies should the need arise.

He said there is a clear constitutional provision that requires the army to support the police.

He also said all assessment the recently concluded Presidential and National Assembly elections shows it was peaceful.

Earlier in her remarks, the Deputy Chief Election Observer from the European Union, Hanna Roberts said the delegations are in Nigeria on the invitation of the Independent National Electoral Commission (INEC).

She said they have also observed elections in Nigeria in the past and have observers deployed in many of the 36 states of the country.

She said after the general election the EU election observation mission would release its final report that would contain its recommendations.

She said, “It is important for us to understand some of the security challenges you have and the way you see things going forward.”