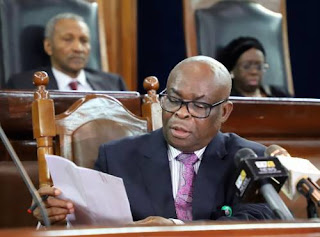 The Supreme Court has fixed May 17 for judgment on the suit by the Cross River State government seeking to set aside the six-count charge of a non-assets declaration against the suspended Chief Justice of Nigeria (CJN), Justice Walter Onnoghen.

A panel of justices of the Supreme Court led by Justice Bode Rhodes-Vivour on Thursday adjourned the suit after listening to arguments of counsel.

The suit was filed by the Attorney General of Cross River State on behalf of the state government and is challenging the suspension and trial of Justice Onnoghen at the Code of Conduct Tribunal (CCT).

At the hearing yesterday, counsel to the Cross River State Government, Locius Nwosu (SAN) asked the apex court to declare as null and void the action of the Federal Government in filing the charges against Justice Onnoghen, without recourse to the National Judicial Council (NJC), and robbed the Code of Conduct Tribunal (CCT) of the jurisdiction to proceed with the trial.

He asked the justices to examine whether the case against Onnoghen does not infringe on the principles of separation of powers and doctrine of checks and balances as provided under “the 1999 constitution, particularly sections 4,5,6, 153(1), 158(1), Paragraph 21(b) of Part 1 of the Third Schedule of the 1999 constitution (as amended).”

But counsel to the Federal Government and Permanent Secretary in the Ministry of Justice, Dayo Apata challenged the jurisdiction of the court to entertain the matter on the grounds that “there is ‎no dispute between the defendants in this suit and the plaintiff as envisaged under section 232(1) of the 1999 constitution (as amended).”

He described the action as “forum shopping and abuse of court process,” informing the apex court that the subject matter of the suit is already before the Court of Appeal which has reserved judgment.