One dead, another injured while testing bulletproof charm in Katsina 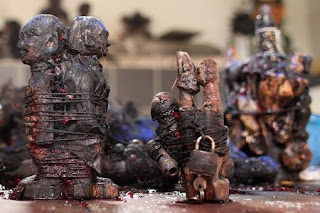 A 40-year-old man, Abubakar Hamisu, has died of gunshot wounds he sustained while he and his friends were testing the efficacy of a bulletproof charm.

The deceased and Salisu are from old Kwari village in the Jibia Local Government Area of Katsina State, where the incident occurred.

The man, who was alleged to have mistakenly pulled the gun’s trigger, Mani Mohammed, has been arrested by the police and charged to court.

Mohammed, 43, who resides in the same village with the deceased and Salisu, reported himself at the Jibia Police Station on the day that the incident occurred.

It was learnt that Mohammed mistakenly pulled the trigger while attempting to collect the gun from the others, who were testing the efficacy of the bulletproof charm.

The gun reportedly went off, while the pellets hit both the deceased and Salisu.

Hamisu and Salisu were rushed to the General Hospital, Jibia, where the former was certified dead, while the latter was treated and later discharged.

Mohammed was arraigned before a Katsina Senior Magistrates’ Court on Tuesday for causing grievous hurt and culpable homicide.

The police said the offences were contrary to sections 246 and 222 (7) of the Penal Code.

The police prosecutor, Sergeant Lawal Bello, told the court that investigation was still in progress on the case.

The presiding senior magistrate, Hajiya Fadila Dikko, adjourned the case to May 7, 2019, for mention and ruled that Mohammed be remanded in prison custody till then.