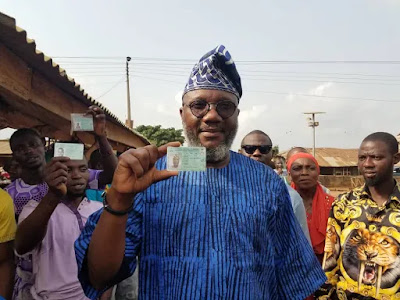 Akinlade stated this in a statement issued by his media aide, Azeez Adelani on Sunday in Abeokuta.

The APM governorship candidate also disclosed that he had directed his legal team to write the United States, United Kingdom, European Union and other international organisations over the issue.

According to Akinlade, the invitation of the international organisations was to request them to send independent observers to monitor the state governorship tribunal case.


He said, “Because any attempt by anyone or group to manipulate or buy judgment, no matter how highly placed, will be resisted with all means possible.”

Akinlade also said he would formally write President Muhammadu Buhari and his deputy, Prof. Yemi Oshibajo on the need to protect his constitutional rights.

He said he would request it from them, “as a supportive citizen who openly endorsed their candidatures and mobilised votes for them during the last Presidential election.

The statement read, “At a strategic meeting held in Ibara Housing Estate, Abeokuta on the 16th of March, 2019, the governorship candidate of the Allied People’s Movement, Adekunle Abdulkabir Akinlade affirmed his resolve to challenge the March 9th election results at the tribunal.

“He claimed that compelling evidence available to him and his team clearly shows that the APM won the election but was rigged out.

“He said that his team had spent the last week gathering evidence to prove this claim.

“When reminded that he once said that he would accept the election result if he lost, Hon. Adekunle Akinlade said that in this instance, he did not lose but was rigged out.

“Akinlade also claimed that Prince Dapo Abiodun was quoted as boasting that ‘Federal Might’ will be deployed to undermine the tribunal judgment regardless of how credible the APM evidence is.

“They stole our APC mandate at the guber primaries on October 2, 2018. They brought in armed uniformed men on the night of March 9th 2019, to manipulate and substitute election results, arrest and send the APM agents away from collation centres to achieve their plans to rig the election.

Akinlade, therefore, called on the good people of Ogun State to remain calm and resolute while promising to restore their mandate and put smiles on their faces, no matter the cost.