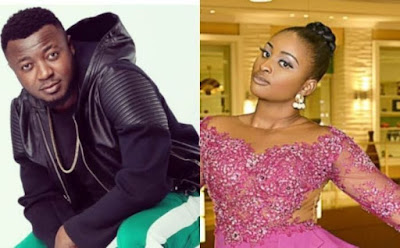 Mc Galaxy who came under scrutiny few days back for allegedly asking women to strip off clothes on his Instagram Live for N50,000.

However the 'Ogbono crooner' Mc galaxy denied, saying all he asks is for the women to dance, but they ended up going to the extreme.

However yesterday night, the Nollywood actress showed up on his live broadcast, and went the limits.


NigerianEye also found out that the actress had threatened to strip on LIVE video few days ago, read her comments below


Etinosa Idemudia, the Nollywood actress who few months ago raised an alarm over threat to her life by her man, striped off all her clothes on MC Galaxy’s Instagram live video last night, with many Nigerians reacting on social media


In support for Etinosa who went completely naked on MC Galaxy's Instagram Live yesterday under the influence of alcohol,let all ladies go naked on their timelines by 9pm tonight.🙄🙄Retweet people....WOMAN POWER!!!https://t.co/I1zcDpghMi
— dr_morula (@DrMorula) March 16, 2019

Imagine ppl saying the reason why Etinosa misbehaved in her video is Cos she was drunk, and it's this same people that said when u are drunk u tend to say or do what u have in mind. The fact remains that the lady is useless. Pls don't go about shifting blames for her stupidity.
— Al Mustapha (@Mmrock2016) March 16, 2019


etinosa "acted" drunk, all her actions were premeditated. For Galaxy - no words
— Olabisi (@Naasmart) March 16, 2019


MC Galaxy is stupid, but she wasn't asked to join the stupidity. MC Galaxy's matter should be separated from Etinosa's Intention to go nude on live video, she wasn't forced, she wasn't under any influence. Would you do the same?
— OONI OF ABUJA (@Deji_OoniAbj) March 16, 2019

Mc Galaxy should've ended the video call to protect her image but even if he didn't he shouldn't be blamed what if it was intentional?
Etinosa should be held responsible for harassing Mc Galaxy but this country is filled with shit-brained feminists who're always biased.
— LeRoy (@NkangLeroy) March 16, 2019

The video is so sad. She sounds very depressed.
Funny how he ends the call with 'sorry we lost etinosa' i.e It would have been nice to keep watching but unfortunately network cut it 😏

If she wanted to release her nudes, no one stop her but not within means he could control
— Chizoba Anyaeji (@ChizobaAnyaeji) March 16, 2019

MC Galaxy and Etinosa are both adults and they did what they did.

She voluntarily offered her naked body to the viewing public. This is feminism goals.

If we can congratulate Mia Khalifa and not judge her, why should we judge an ordinary stripper?
— Lagos-Delta Hybrid (@Zuronye) March 16, 2019

Imagine if it was Mc Galaxy that was naked on Etinosa IG video, I wonder what twitter will say, Or does this rules only apply for females?
— Cabron (@AbdulKabir69) March 16, 2019


Instead of people try to connect with Etinosa to be sure she is fine and not harming herself. You are here cursing the man. Putting the blame on him.


Most people don’t know that issues like this is what made Kim Kardashian popular and rich, the Etinosa babe should turn this Lemon to Lemonade and become the most sorted actress. She’s obviously very good at acting. Stop blaming MC Galaxy, he was being real.
— Tyrion 🇳🇬♨💯🔥 (@Kenny_Pharez) March 16, 2019

MC Galaxy should have ended the video call knowing she was drunk and Etinosa being drunk doesn't mean she's not guilty also in the viral video. She should also pay for her action for the part she played drunk or not
— G•O•A•T (@DatUdiBoy) March 16, 2019


How can you even blame MC galaxy for that video? It’s a live video and Etinosa went naked herself, he was even surprised so how is it his fault?

He only could have prevented it from going further by ending the video earlier.
— Otunba|Alhaji ROYZ🤴🏼 (@royzkingin) March 16, 2019