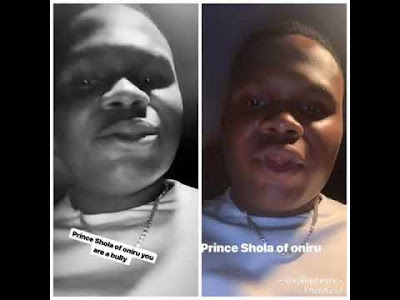 A popular Nigerian online comedian, Babatunde Ogunleye, popularly known as Oluwadolarz, has accused one Prince Shola Oniru of allegedly assaulting him for parking behind his car.

It was gathered that the comedian had on Saturday gone for a birthday party with his friends at the Oniru area of Lagos and parked his car behind another.

NE learnt that after a while, Ogunleye was called to come and move his car so as to allow the car in front of his to go.

In a series of rant videos posted on his Instagram page, Ogunleye accused Oniru of slapping and punching him in the mouth for parking behind his car.

Ogunleye, who noted that Oniru did not give him the chance for any explanation or to apologise before attacking him, condemned royalty in Nigeria, adding that if that was what being royal was all about, then it was nothing to write home about.

He said, “If this is what royalty is all about in Nigeria, then you guys are f..ked; I respect kings and anybody that has to do with this royalty thing but this night, I went to Oniru for a birthday party with my friends and I parked my car behind a car.

“After a while, they came to call me that someone wanted to move his car and I went there peacefully to reverse my car and the next thing he did was to slap and punch me in the mouth without allowing me to say anything. He said why should I park behind his car. Prince Shola Oniru, you are f..ked up.

“This is trash; I didn’t say a word; all I wanted to do was to reverse my car because I hate arguing or fighting, and all you have to do was to stoop so low and behave stupid.”

In the video, Ogunleye was seen showing his bloodied hand and swollen mouth.

Reacting to the video on Twitter, the Head of the Public Complaint Rapid Response Unit of the Nigeria Police Force, ACP Abayomi Shogunle, urged the victim to report the assault to the nearest police station.

He tweeted, “Good morning, this looks like a case of assault. Kindly lodge a complaint at the nearest police station to the scene, required action would be taken. If you are not satisfied with the police action, contact @PoliceNG­_CRU.”

Responding to Shogunle’s tweet, Ogunleye said, “Thank you sir, I will be on my way.”