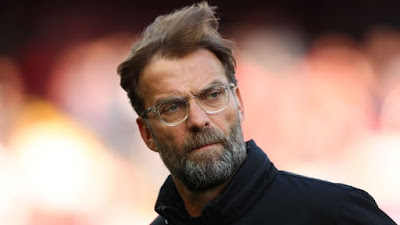 Jurgen Klopp insists Liverpool still have the look of Premier League champions despite a goalless Merseyside derby draw at Everton that saw them fall a point behind Manchester City at the top of the table.

After a run of four draws in their past six league games, Liverpool ended the weekend behind City for the first time in three months having played the same number of games as Pep Guardiola’s defending champions.

Everton’s run without a derby win extended to 19 games stretching back to 2010.

However, the celebrations from the home supporters on the final whistle indicated how much they believe they have damaged Liverpool’s hopes of securing a first league title in 29 years.

Klopp, however, remained defiant and continues to see evidence that his players have the resilience to cope with the pressure of one of the most tense title races in years.

“I don’t have to give my players any advice, they know already,” said Klopp. “They’re not little boys any more.


“Sometimes you have the lead and people say it’s done when there are 20 games to go to the end of the season, and now they have one or two more points than us. It’s the beginning of March, who cares?

“I believe 100 percent in our chances. I know that game-by-game my feeling gets better about the boys because they look ready for it.

“Today, of course, we didn’t score, that can happen. A difficult game, opponent, and the wind and weather circumstances didn’t help for football in general, it was just a fight.

“We were ready for that today and now we have a point more than before — all good.”

The game, and league table, could have had a very different look had Mohamed Salah not missed the best chance of the game on 28 minutes.

Morgan Schneiderlin’s error in midfield allowed Fabinho to play a first-time through ball which sent the Egyptian bearing down on goal with only Jordan Pickford to beat.

But the England goalkeeper, who was at fault for Liverpool’s dramatic 96th-minute winner when the sides met in December, did well to spread himself and beat away Salah’s shot.

Salah also missed the best opportunity of the second half when a bad touch allowed Michael Keane to make a magnificent last-ditch challenge.

The African player of the year, who scored 44 goals in an incredible first season at Anfield, has now scored just once in his last seven games.

“When you see the situation, he is doing everything right,” Klopp said of Salah’s wasted chances. “He takes his decision a millisecond earlier or later and the defender can jump in.

“We had our moments but there is no reason for taking it or not taking it, you have to fight against the circumstances, against the opponent, and the boys did that.”

There were other chances for Liverpool, the best of which fell to Fabinho 21 minutes from time, but he took too long to control and allowed Lucas Digne to make a tackle.

Yet, Everton could even have snatched a long-awaited win near the end when substitute Richarlison’s low cross just eluded Bernard.

“We knew how much this fixture means to the fans,” said Pickford. “If you can’t score then don’t concede.”